This week I’m sharing the details for my spring baby’s second birthday party (in honor of his upcoming, seventh birthday)!  I decided on a dinosaur theme, mainly because I wanted to create some dinosaur tails for the party favors, and I knew my son would love having one.  I used this tutorial to make the tails.  This was my first sewing project (so a beginner can make these – no kidding)!  I bought this sewing machine and I would highly recommend it to newbies – it’s easy to use (and there are YouTube videos if you get stuck with threading the bobbin or adjusting the tension like I did, haha). The tails turned out great and the kids LOVED them!  I made them 5 years ago, and ours are still going strong (I made the straps slightly longer than the tutorial, so that probably helped increase the longevity of their use). 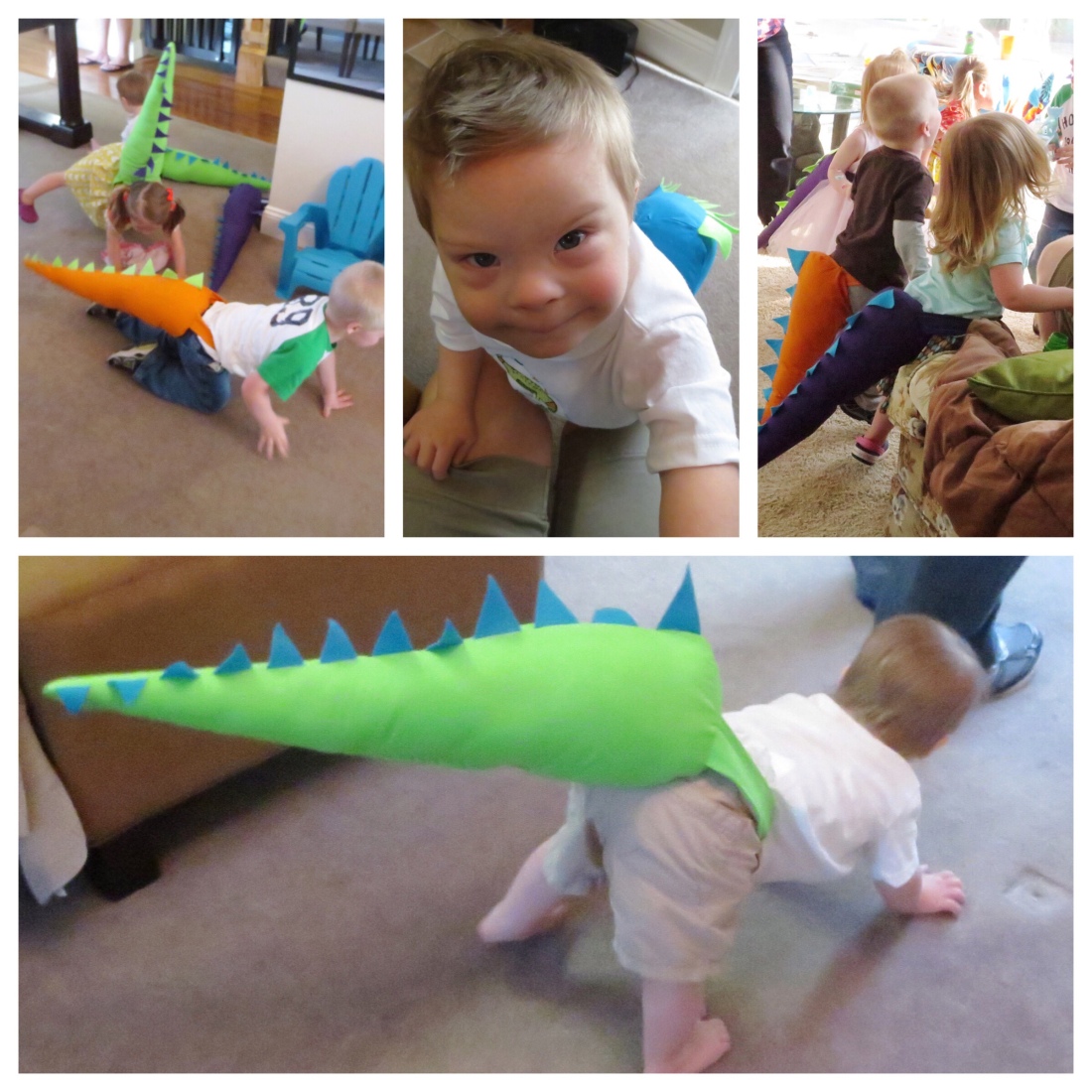 I had also planned on burying these dinosaur skeletons in a rice table so the kids could “dig for fossils,” but I ran out of time.  I always seem to have more ideas than time to execute them…  😀  Thankfully, the dinosaur tails were enough entertainment for the kids!

For the invitations, I used Microsoft Word: word art for the “2,” clip art for the dinosaurs, and a free Jurassic Park font I downloaded for the text.  I saved the document as a jpeg and emailed it out. 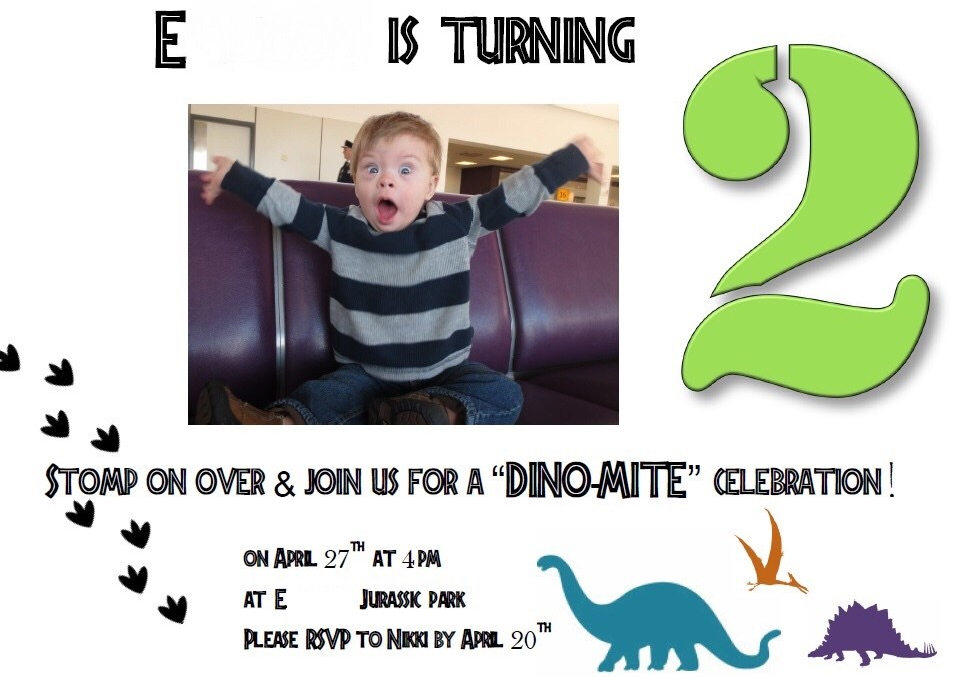 I cut the dinosaur shapes out of cardboard (used the invitation dino’s for inspiration – just sketched them in pencil until I got decent outlines), and painted them light gray using one of the sample paints available at Lowe’s.  I used the same method to make the Happy Birthday banner as his first birthday party. 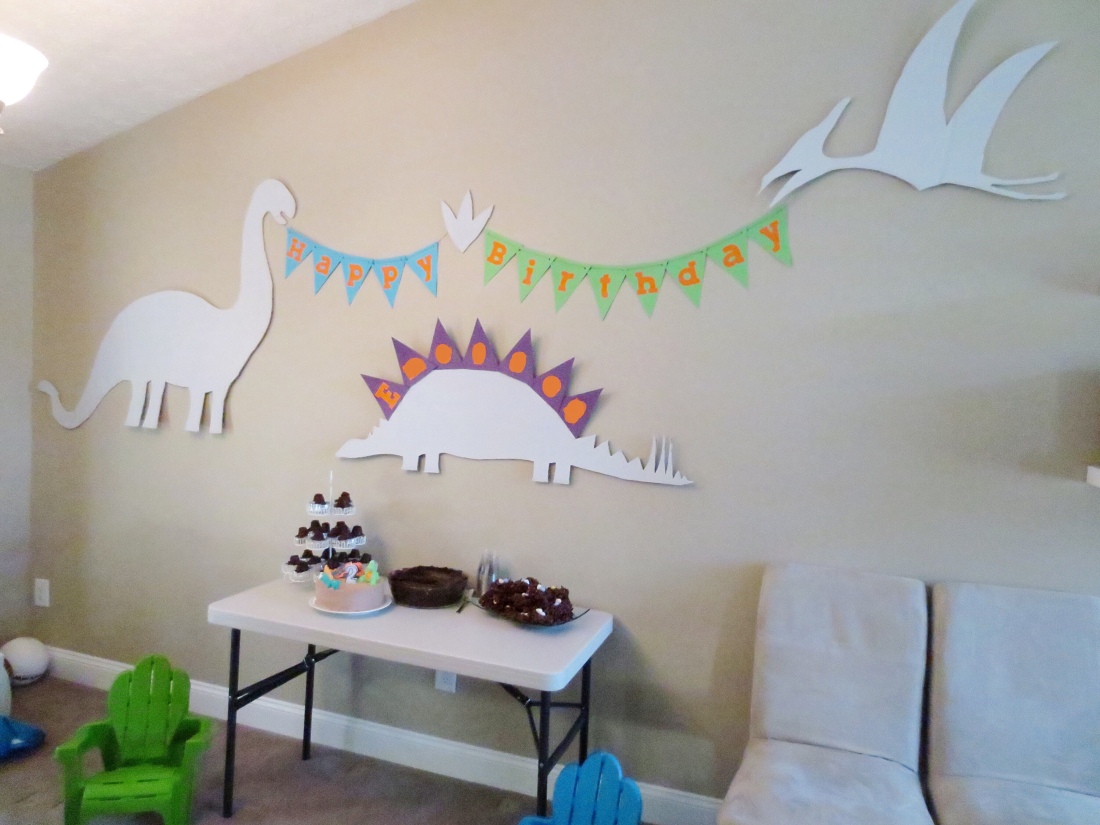 For the food, we had “carnivores” (spare ribs and dinosaur-shaped, chicken nuggets), “herbivores” (sweet potato fries and dinosaur-shaped, peanut butter and jelly sandwiches), “layers of the earth” (yogurt parfait and fruit salad), and of course, a “watering hole” for drinks.  I used these dinosaur cookie cutters for some sugar cookies – shown between the water and tails below.

I used these volcano molds for chocolate cupcakes, with a strawberry (lava!) filling inside and pouring down the sides.  If I could do it again, I would also add some red frosting around the top and down the sides of the volcano cupcakes.  The filling was good – but more frosting never hurt anyone. 😉  We also had “pterodactyl” nests with eggs, “mud and dirt,” and a cake with marshmallow fondant dinosaurs and volcano, and graham cracker “sand”.  Another tip – make the fondant cake toppers the day before; then you will have as much time to spend on them as you need (I did them the morning of the party, so they’re okay, but a little sad, haha).

The other thing I made with my new sewing machine was a shirt for the birthday boy.  I just got some dinosaur fabric from Jo-Ann’s, cut it into a “2” using a paper template (I think I used my Cricut to cut the paper – but you could always print one and cut it out), and sewed it onto a shirt using a tight, zig-zag stitch.  I took it slow and it worked out fine! 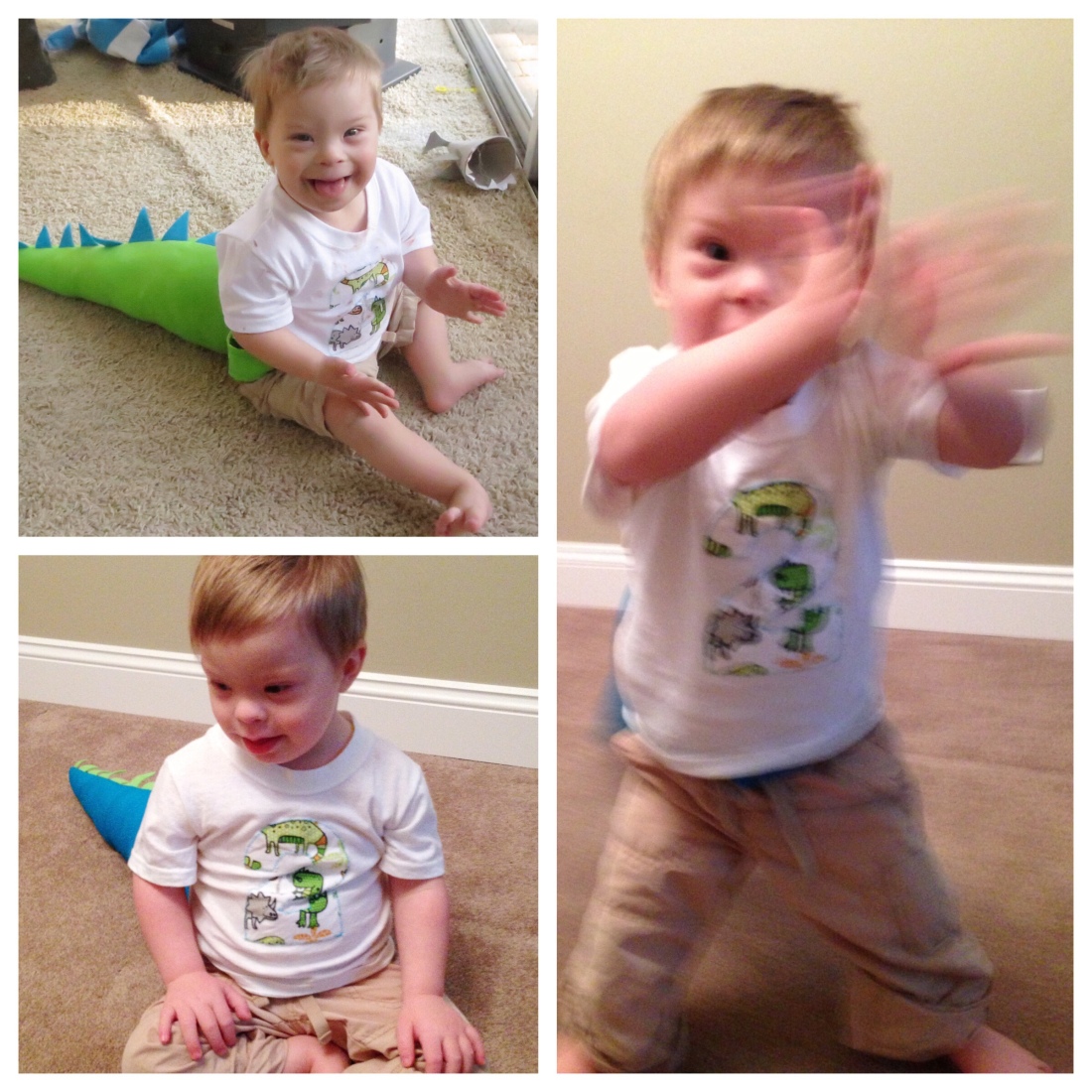 We also had these dinosaur tattoos for the kiddos – I love giving out temporary tattoos at birthday parties.  I guess it’s because I loved them growing up?  🙂

The dinosaur tails work great for pets, too!  😉

Anyone else try making their own marshmallow fondant?  It’s delicious, right?!  But please tell me I’m not the only one that made some sad decorations with it the first go around…  Haha!

7 thoughts on “A Dinosaur Birthday Party!”