Well after another week of mostly good weather (seriously, will winter ever end? I’m starting to feel like it may not). In the past couple of weeks, the upstairs windows and a roof were installed. Well a plywood roof anyways. With any luck, shingles will go on this weekend. Eventually, the entire front elevation will be updated, removing the brick and resizing the front windows to make more sense. The contractor suggested it, and I jumped at the chance to give the house a little more curb appeal (and have someone else get rid of that planter I’ve been wanting to get rid of since we moved in 8 years ago!). We also want to replace all the remaining first floor windows to match, though some on the sides (associated with former bathrooms) will be removed to make more sense on the interior. 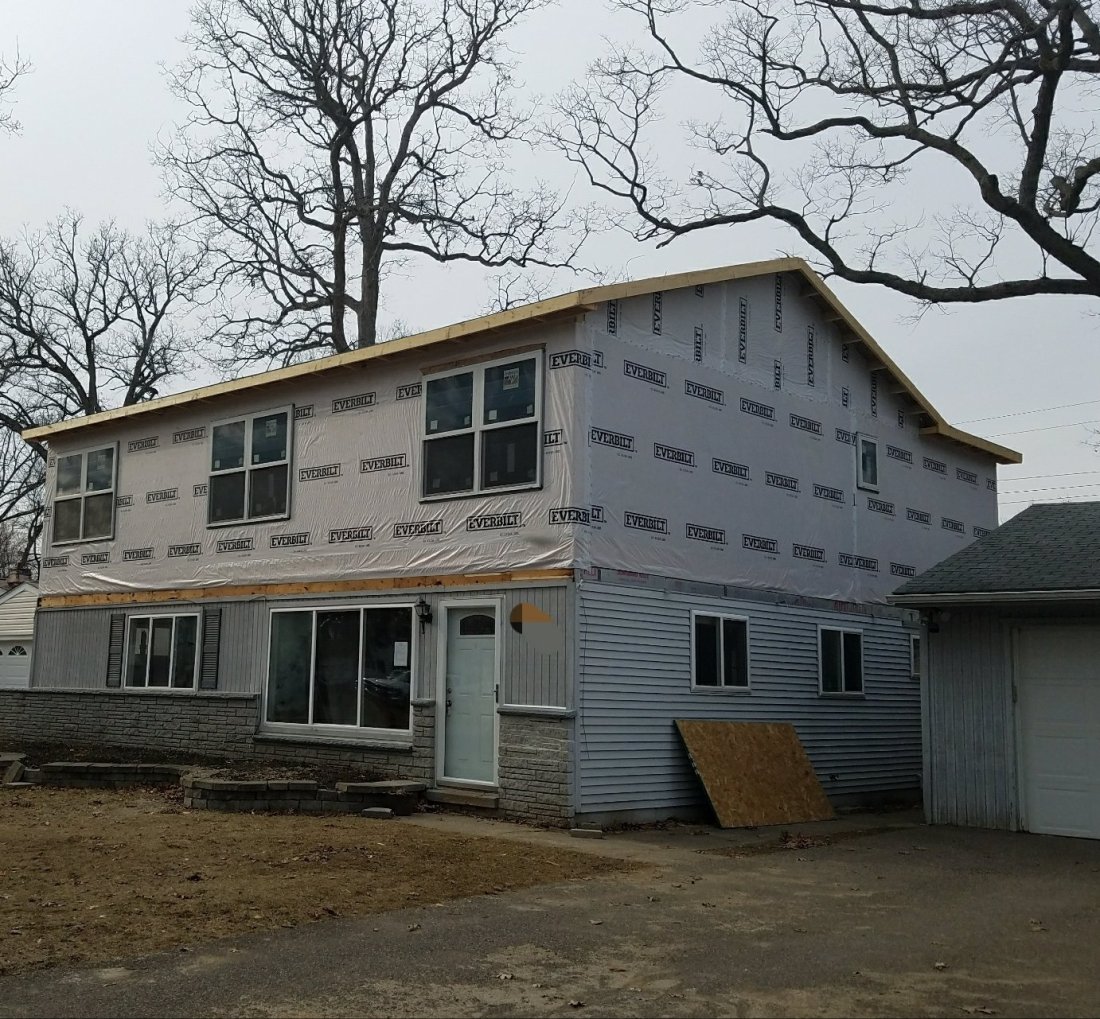 We also took a walk through the house to look at the progress. The kitchen area is framed out and we discussed relocating the downstairs bathroom to the former utility closet area, and will likely put a shower under the stair area, though the final plan/layout hasn’t been determined. The small window you see on the right is going to be removed, it was formerly in the utility room, is a weird height and was never used. We are adding an exterior door (you can see the framing in the corner) which will have windows so we think we will still have adequate natural light in that area of the house (it will be a mudroom).

Upstairs, the rooms have all been framed and you can really start to imagine what it will be like when it’s done. 😁

Anyone else have any big projects this eternal winter is delaying?

One thought on “Midwest Renovation progress”

Happy Easter!! 🐰⛪️ He is Risen!! 🙌 Hope everyone is having a wonderful family celebration today! Lots of hidden bunnies in this picture... The little girl wasted no time picking her bunny cinnamon roll out... ☺️😆🥰
TGIF!! 🙌 Yes, still have Christmas decor up... Let’s just say January has been busier than expected! 🤪 Here’s hoping for a productive weekend (with some down time, too)! Maybe one day this year we’ll find a minute to finally share all the projects we did in 2020...😬 #goals 😂
When you live in Maryland, big fluffy snow like we had today is really exciting! ❄️🙌 Actually, I think I posted almost this exact picture a year ago (possibly to the day). 😂 Hope locals got to get outside & play today! 🤗 Also, who remembers our old windows with white frames - or when we gabled these dormer windows?! Swipe 👈 for some flashbacks... 😁
TGIF! Is it just me or was this a loooooong week?! Looking forward to snuggling on the couch in front of the fire, and maybe finally addressing our Christmas cards while watching a Christmas movie this weekend... With some wine, obviously. 😁😂🎄🍷
Does anyone decorate their bedroom for Christmas? We typically don’t, but I decided to do our Christmas card photos in here this year. Now that it’s decorated I kind of love it! 😆 Also, this is Winston’s “I don’t care if you pet me” pose - but really, he’s begging me to pet him... 🤣
Anyone else start decorating for Christmas yet? 🙋‍♀️ I couldn’t help myself this past weekend... (Don’t worry - I still have lots of pumpkins out - spy the dining table & mantel in the last 2 pics! 😉😁).