Since I shared H’s shark room last week, and the baby girl’s magical nursery a few weeks back, I thought today I should share my oldest’s room!  His room decor is somewhere between H’s room (which is on the minimally themed side) and the baby girl’s room (pretty heavily themed, haha).  He became a Spongebob fan a few years ago (was especially into him when I was pregnant with his brother – I may or may not have let him watch it while I napped on the couch during the narcolepsy months) and was born a Star Wars fan – thanks to his dad 🙂

The first step was to paint the walls.  Here are some pictures from before we moved in (again – hard to believe how tiny the boys were!): 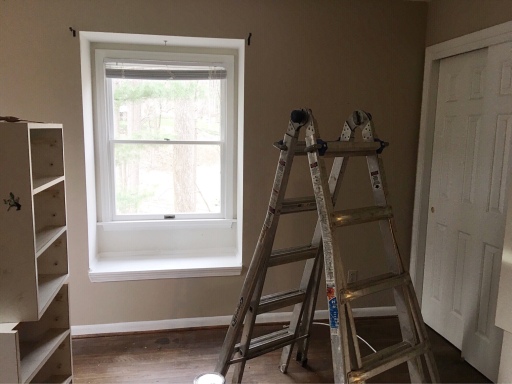 And right after painting it Smoke Embers, but before moving things around too much (notice how he has a double closet – lucky kid!): 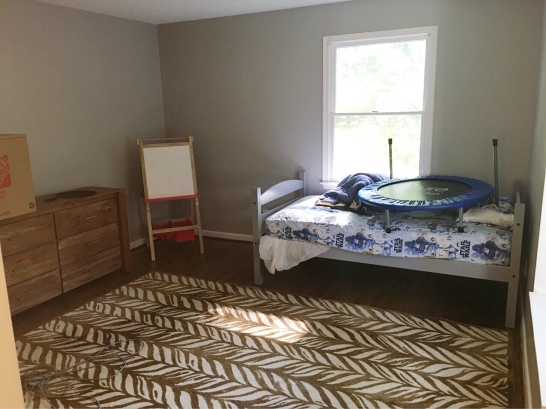 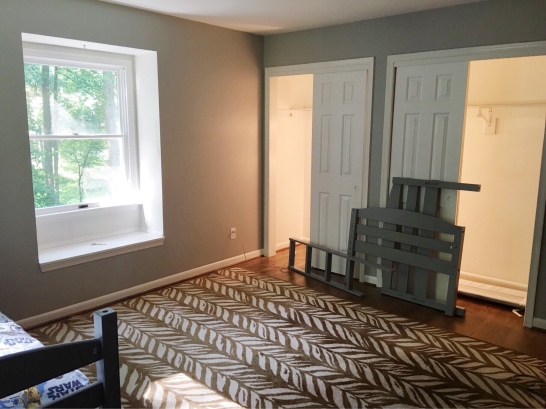 Eventually, we upgraded H from a mattress on the floor to the gray bed pictured above, and got a twin-over-full bunk bed for E (I got it on clearance because someone had ordered it online and returned it to the store – score!).

E’s Nana made him a Spongebob house, which I hung in his closet to create a cozy, reading nook (he loves reading)!  Behind it is his baby quilt (guests at my baby shower for him each colored and signed a square, and my mom sewed the quilt). 🙂 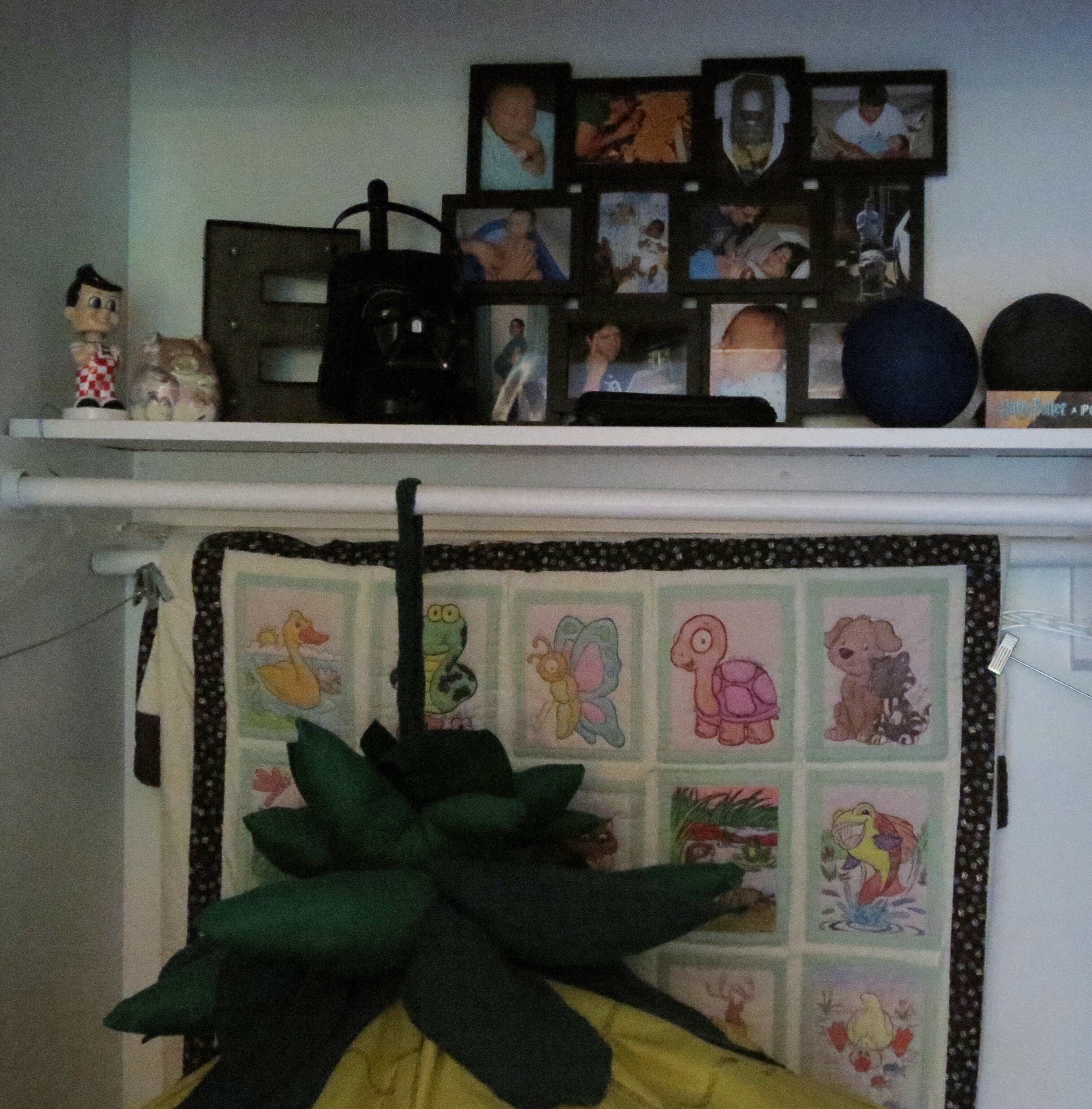 I used simple IKEA picture ledges to display some pictures and some of his things.  The dragon wings on the chalkboard are from his Halloween costume last year – something to cover in another post 🙂 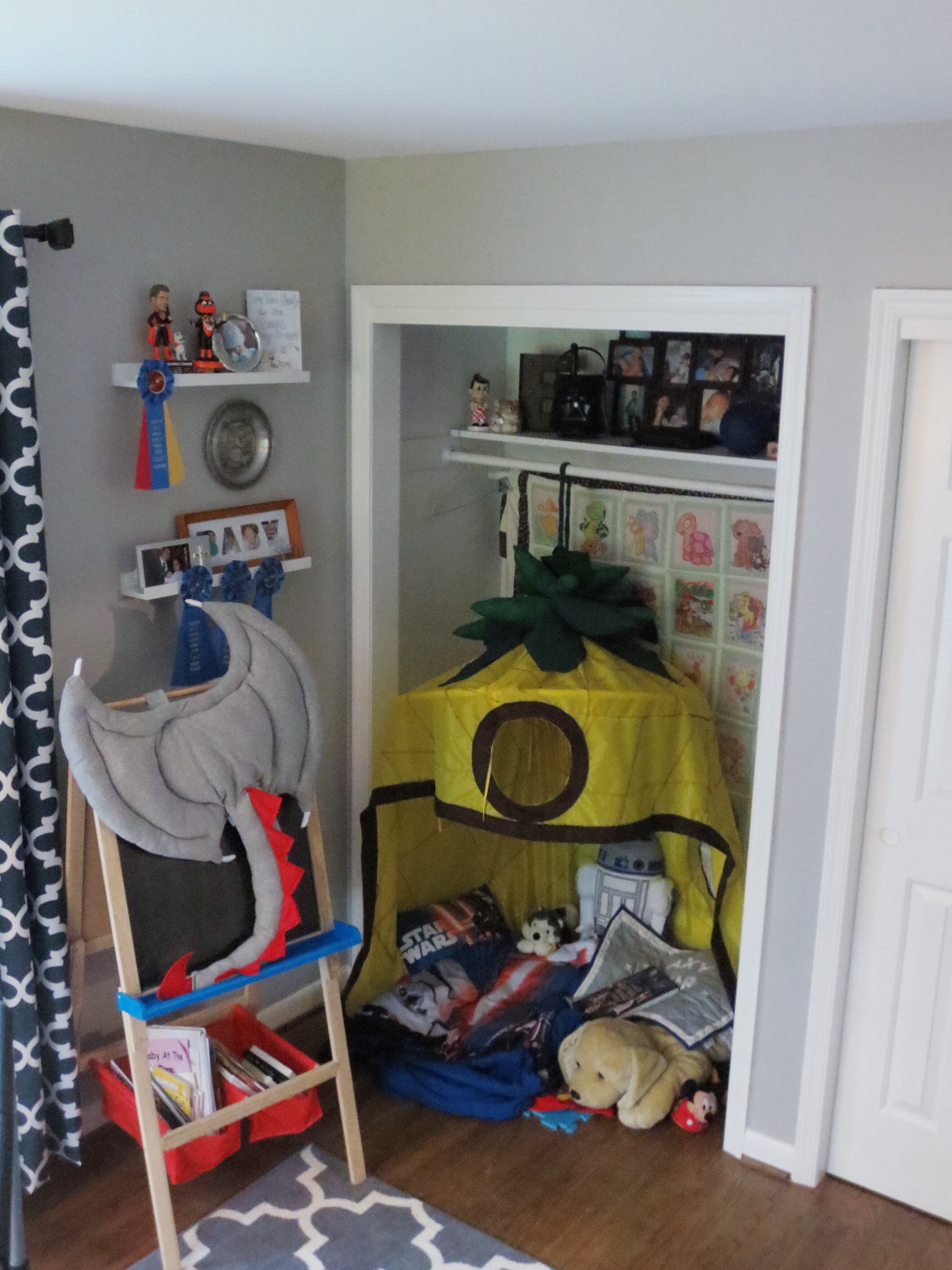 On the other side of the room, I used IKEA lack shelves to display more pictures and belongings.  The giant Spongebob and Gary were another Halloween costume (and trick-or-treat bag)!  And the smaller Spongebob is a past Easter basket (I might be a tad sentimental… haha). 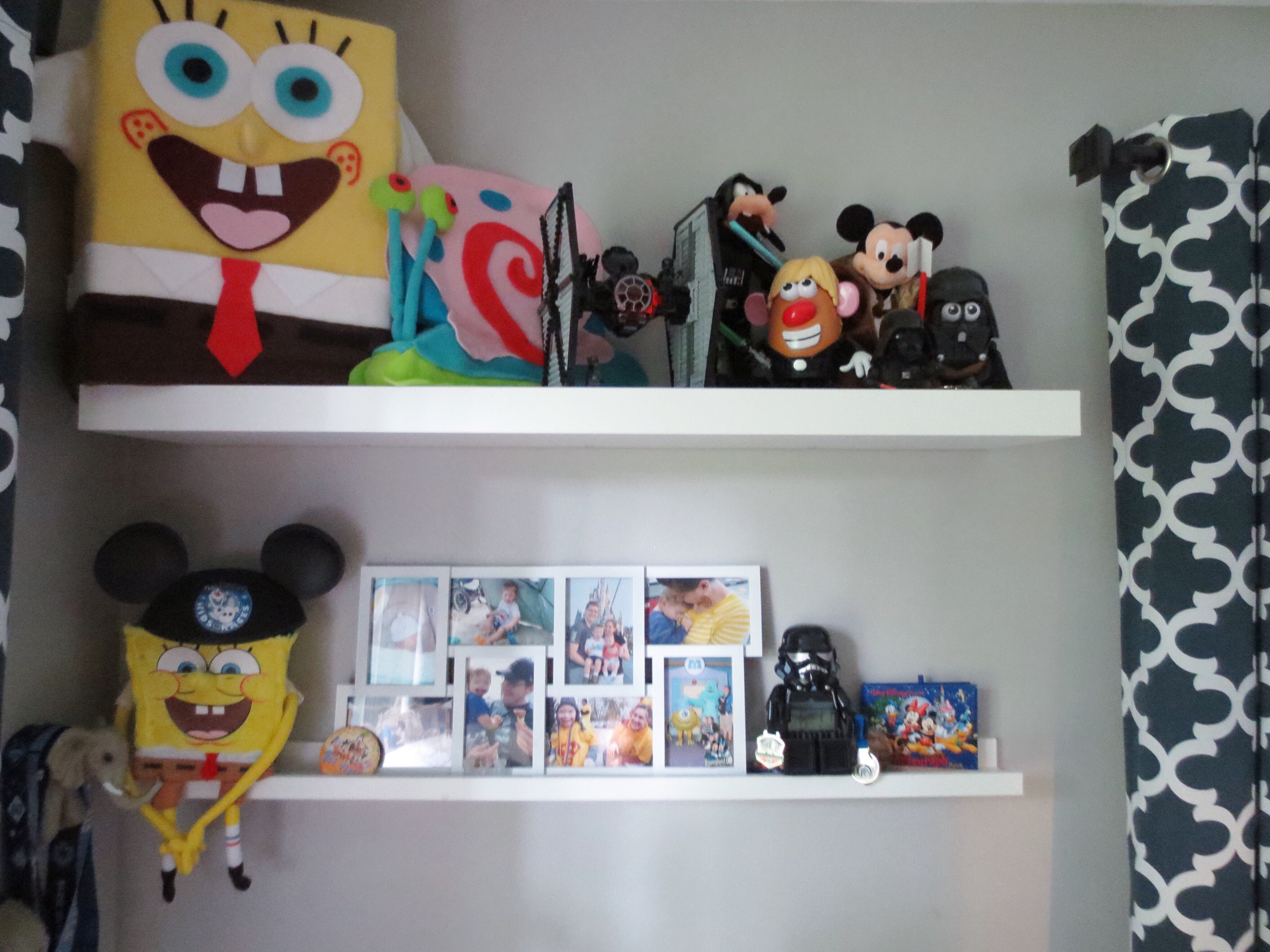 He also has a thing for elephants, so he has some hooks from his grandparents where we put his medals:

Here’s a few more wider shots of the room: 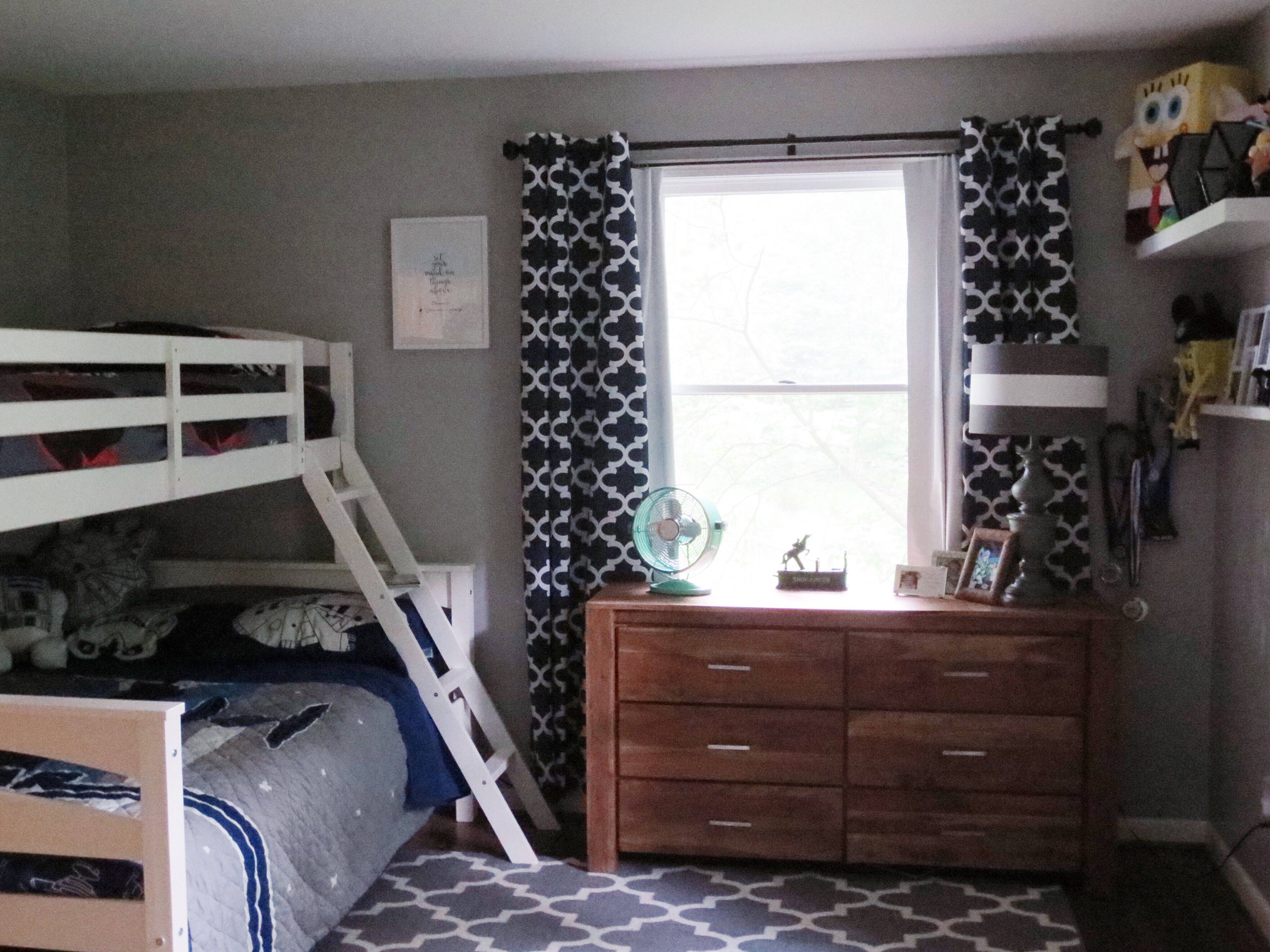 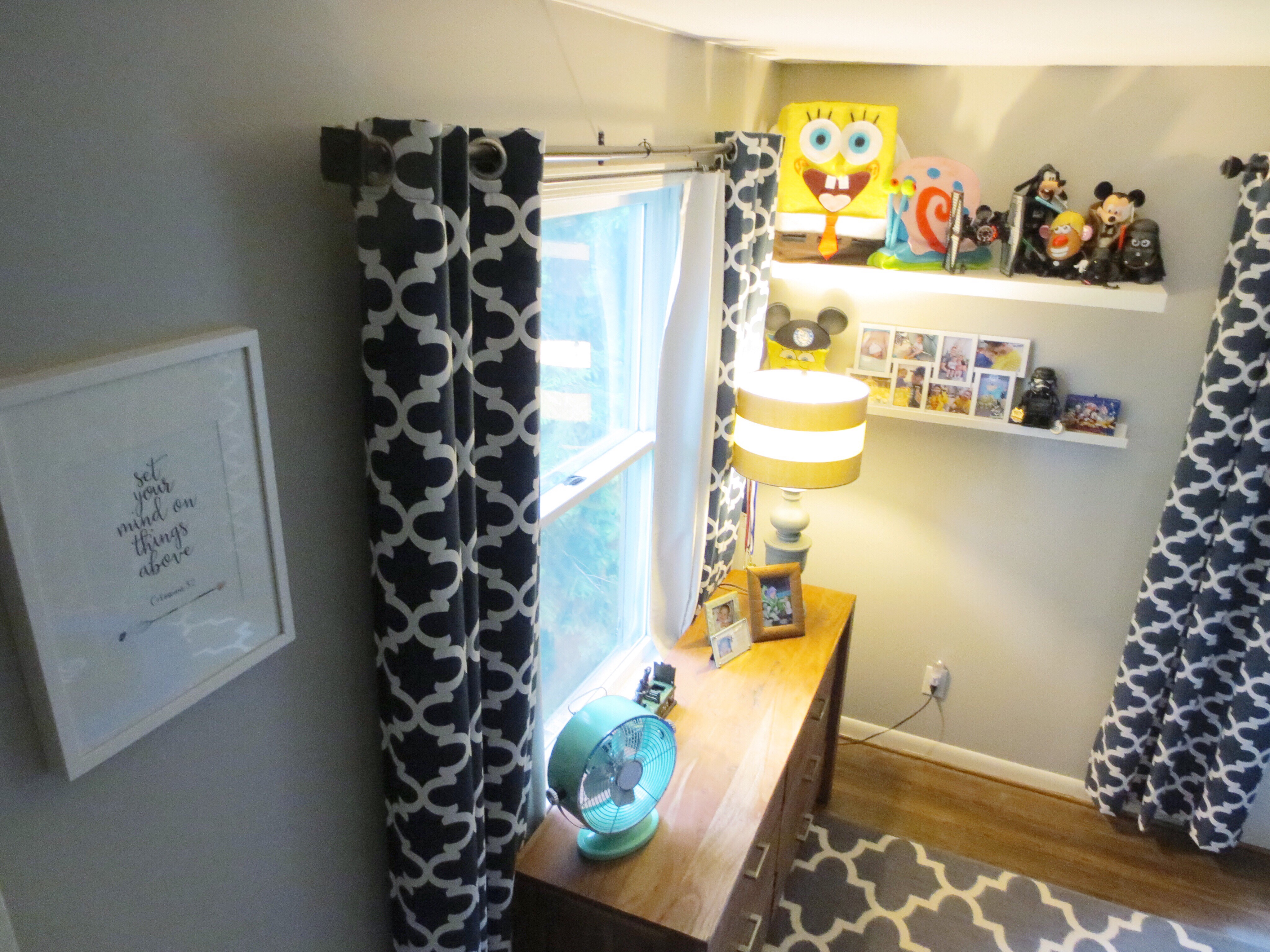 Also, how cool is it that his bedroom door is a dutch door?!  The wreath on it is from his first birthday. 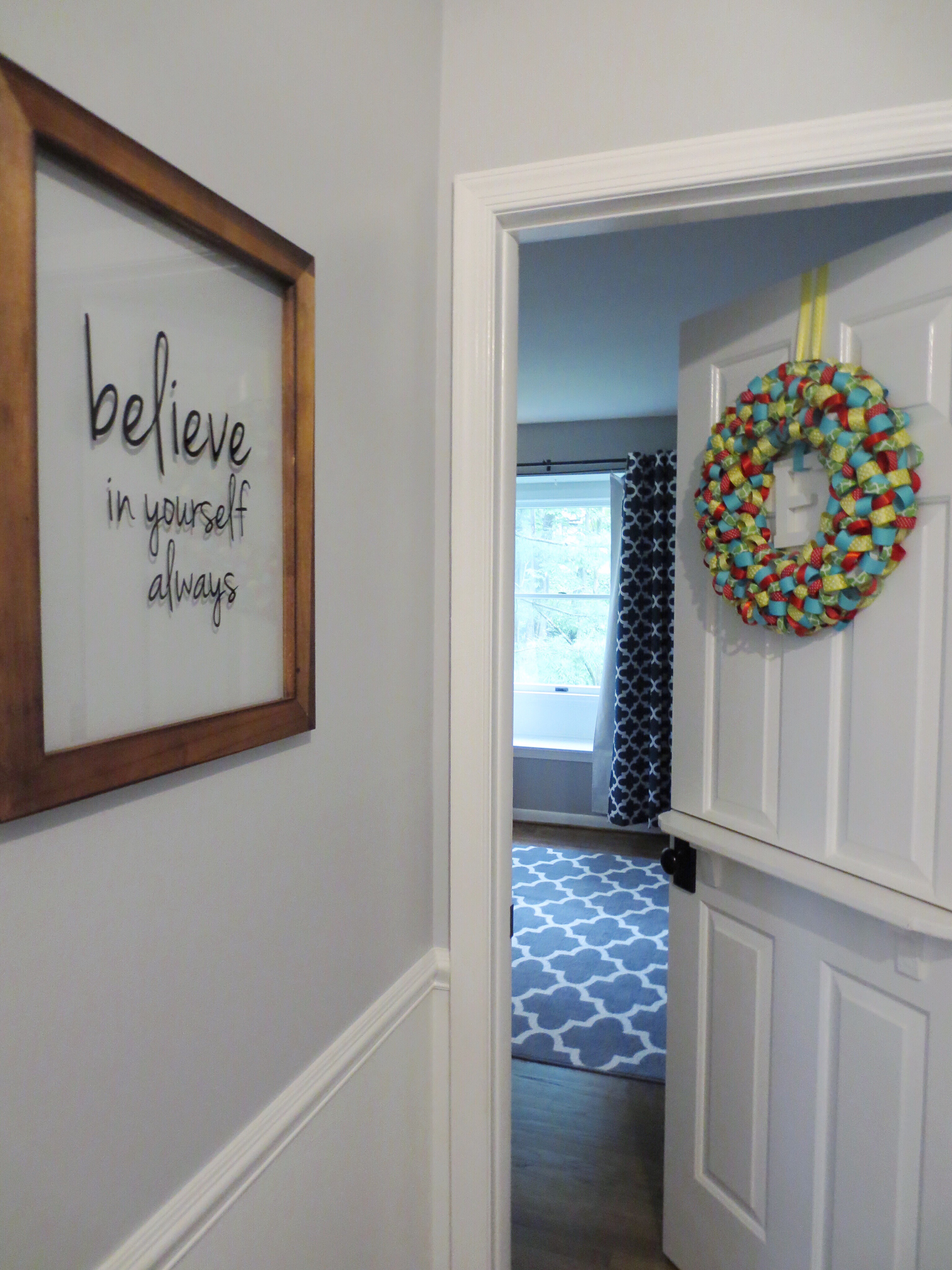 Things left to do:

So we’re almost done with this room (at least until he’s older and requests to switch things up)!

We let the boys pick their own rooms when we moved in, and I have to say, E really knew what he was doing… haha.  I’d love to have that door and those closets growing up!  So do you think it’s crazy that we have a trampoline in his room?  It can actually be a handy way for the boys to burn off some energy before bedtime, but it might move to the basement eventually 🙂