This past weekend we hit a big milestone for the East Coast household – we officially have a playground!!

This is a big deal for us because our kids are 21 months old, 4 years old, and 7 years old, so having a playground in the backyard will easily get used (frequently!) for the next decade, if not more!

The playground is a set from Costco, and came in 4 giant boxes of parts, plus a slide. My father-in-law helped the hubs to build it (and actually he got it for the kids as their big gift for the year – lucky kids!), but first they had to level out a spot for it. Except our backyard is almost entirely a giant, gradual slope, so they decided it would be easier to build a deck for the playhouse structure instead! The deck is 16 ft x 16 ft, which allows for a few feet of clearance around the playhouse and curly slide. The swing portion was leveled before the supports were cemented in-place, but this wasn’t as hard to do because they’re in an area that was the most level to begin with.

Here’s a picture of them trying to figure out placement of the playground (the empty space on the left is over a septic tank, so we didn’t want to put it there).

We settled on tearing out some of the brush on the right side of the backyard, and nestling it off to the side (I really wanted it on one side or the other, as opposed to the middle of the yard, so it feels balanced). 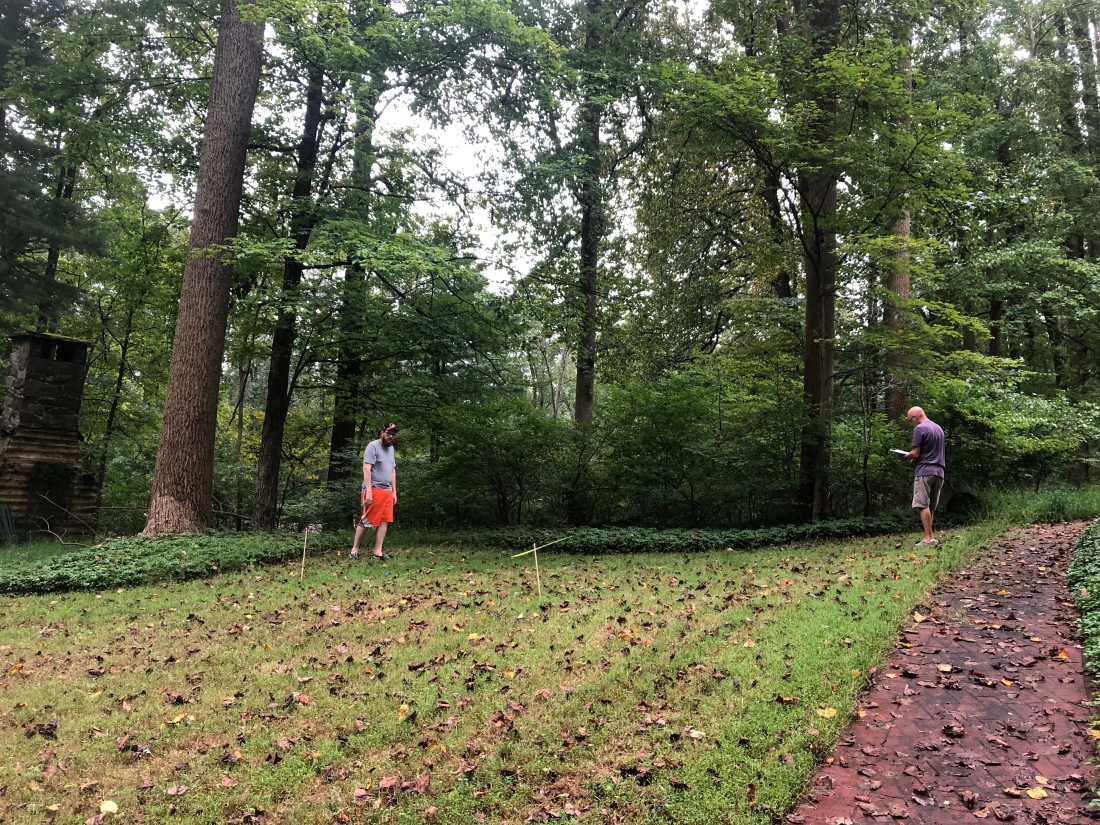 Then began the brush clearing and deck building (the footers are set with cement):

And a LOT as soon as the deck was done… 😆 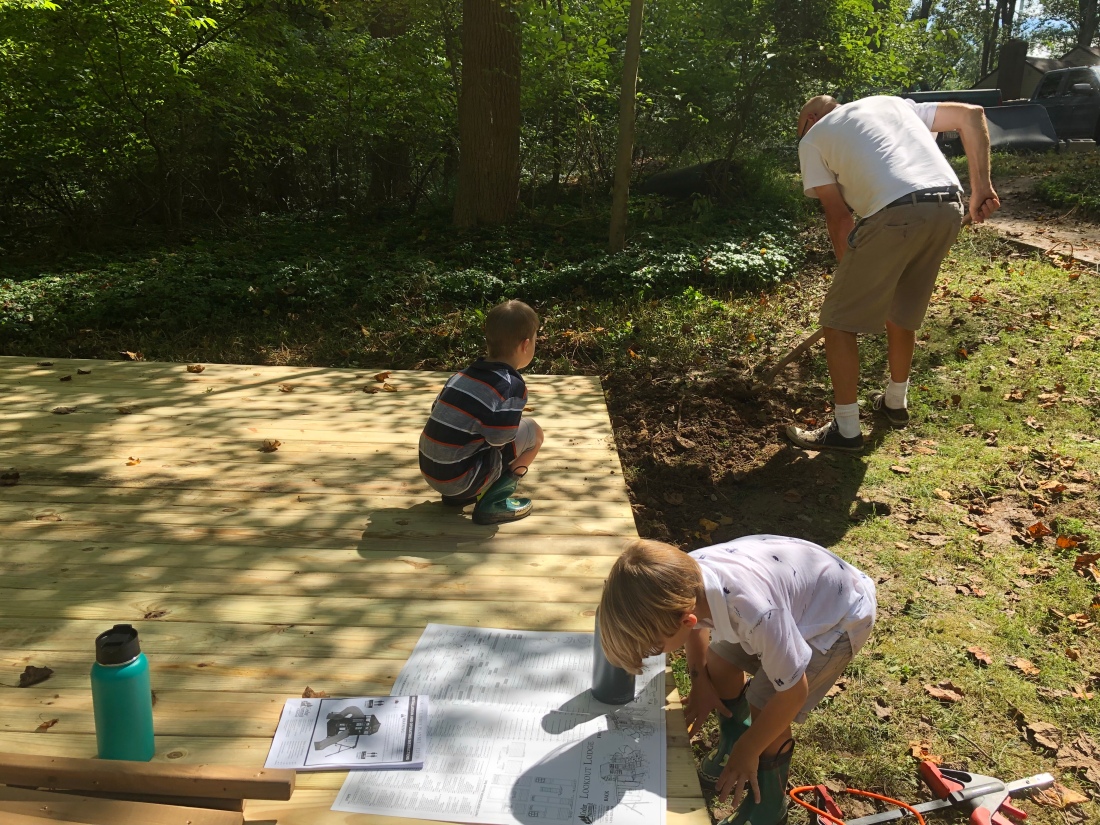 It took 2 days to build the deck (the cement around the posts had to cure overnight before finishing it), and the majority of a day to get a fair amount of the playhouse installed.

My father-in-law finished building EVERYTHING throughout the week, while the hubs and I were at work. Every day the kids would gleefully run to the playground to check out the latest progress, haha.

Note how they added some giant stone pavers to extend the front corner of the deck. You can see how this corner is level with the ground, so the pavers (found buried under the brush they removed) helps to decrease the kids from tracking around mud, since it’s the main access point to the deck. We still need to add weed-blocker and some wood chips under the swings (but for now I’m calling this project done 😊). So without further adieu, here are a ton of pictures of the finished product! 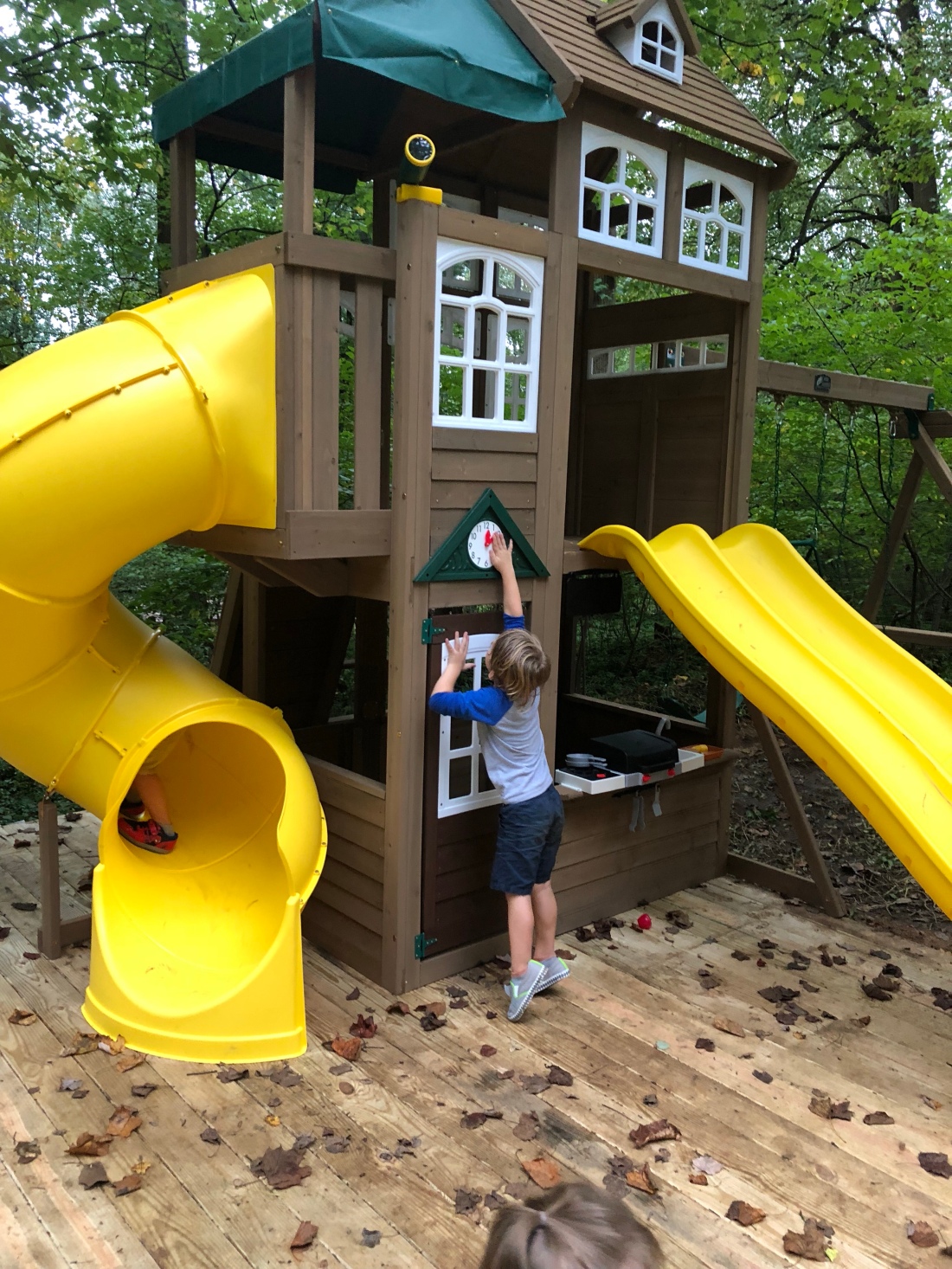 At first I thought I would dislike the colors of the playground (loving all the makeovers where people are painting the wood white), but I actually LOVE the colors of the wood for this set. It’s so pretty in-person! Plus, it’s cedar so it smells great, and I would hate to cover that up with paint! I would also hate to not be able to call this project done yet. Even though I had zero part in contributing to it being finished – except maybe to create more work by insisting it be installed where bushes had to be removed for better “balance”. I promise it was an amicable compromise though… 😂

2 thoughts on “A Playground for the Backyard!”

Happy Valentines Day!! 💘What a crazy week this has been! Definitely looking forward to a relaxing long weekend! ☺️ Swipe 👈 to see what this room looked like on move-in day - so dark! Definitely one of my favorite room transformations in our house (the power of paint 🙌)! Oh, and check out our stories to see the last-minute teacher Valentines I made last night 🙊 At least the kids finished theirs earlier in the week? 🤷‍♀️ Happy Friday!! . . . #eastcoastsisterhouse #eastcoastsisterprojects #valentines #dogsofinstagram #diy #beforeandafter #carpenterdaughterpeepmyreno #therenovatednest #arhausinmyhouse #manteldecor #whitewash #fireplace #fireplacedecor #fireplacemakeover #fireplacemantel
Its Friday! I could do without all the snow we got in the last couple of days, but I am glad the weekend is here. That also means lots of laundry and other chores over here so I am sharing our new laundry countertop install over on the blog (so functional!) #etmcblog #midwestsisterprojects #homereno #renovation #diy #laundry #butcherblock #diyprojects #laundryroom
Just a girl and her dog... 😍 This week on the blog I’m sharing some pantry organization progress (link in profile✨)! 🤗 Swipe 👈 for some before and after sneak peeks, because I cannot contain my excitement after finally tackling this space!! 🤓😂 Next up, building our mudroom shelves so we can stop storing our shoes in our pantry... 😆 Anyone else obsessed with pretty organization?! 💘 . . . #etmcblog #eastcoastsisterhouse #eastcoastsisterprojects #beforeandafter #therenovatednest #carpenterdaughterpeepmyreno #pantryorganization #pantry #diy #dogsofinstagram #organization #labels
Sunday Funday! Kids spent lots of energy jumping around before the Super Bowl started. 😂 Not sure what we would do without our bounce house during the winter. 🙌 Happy Sunday! P.S. swipe 👈 to see what this room looked like before I painted the walls or floor (looking the opposite direction), then before I painted the floor - it’s shocking it’s the same space! 🤯 . . . #eastcoastsisterhouse #eastcoastsisterprojects #diy #beforeandafter #paintedfloor #rugsusareveal #therenovatednest #carpenterdaughterpeepmyreno
Its finally Friday! Did this week seem endless to everyone else? I did manage to finally get my 2020 project goals put together and and written down in one place on the blog, so I'm calling the week a win! #housegoals #2020goals #homereno #diyrenovation #diy #mudroom #midwestsisterprojects #etmcblog
Happy Tuesday! I’m SO EXCITED to be sharing my daughter’s pink flamingo🦩themed birthday party on the blog today (link in profile✨)! 🥰 I’m even using the party favors my kids made at the party as Valentine’s Day decor on our mantle in this picture (which, btw, one million bonus points if you can spot Winston in this pic 🤣)! 💞 Swipe 👈 for some close-ups & a sneak peek of the party details! This cake was my favorite (and all the details on how I made it are in the blog post 💪)! 😍🦩 . . . #etmcblog #eastcoastsisterhouse #eastcoastsisterprojects #diycrafts #diy #partyplanner #flamingo #pinkflamingo #flamingoparty #pinkflamingoparty #snowglobe #diysnowglobe #dogsofinstagram #myinteriorstylefile #valentines #valentinedecor #valentinesdecor #mantel #manteldecor #rugsusareveal #mypotterybarn