Hey, there! So last week I shared our past Star Wars costumes for Halloween ideas, and this week I thought I would share a few more (as the title implies 😁).

For E’s third Halloween he went as Super Why, because he was REALLY into the show at the time. Back then, we were very careful to only let him watch “educational shows,” and by the next year, his favorite show was Spongebob (which started when I was pregnant with H, because it allowed me a post-work nap while the hubs made dinner). Ummm… yea – that TV situation clearly escalated quickly… 😂

By the following year, both boys were into Monsters, Inc., and H was gifted the most adorable Sully onesie – so those costumes basically chose themselves.

For the Super Why costume, I felt like I could DIY a cute version easily, but it ended out being more time-consuming than I anticipated. This was also one of my first sewing projects, so that could be why it took me so long… I got a green long sleeved shirt and pants (in retrospect, I should’ve looked for green long underwear so they would’ve matched), and very carefully and slowly added blue or yellow fabric in the appropriate places for the cape, arm cuffs, underwear, and belt. I used puffy paint (and blue and white fabric) for the logo. 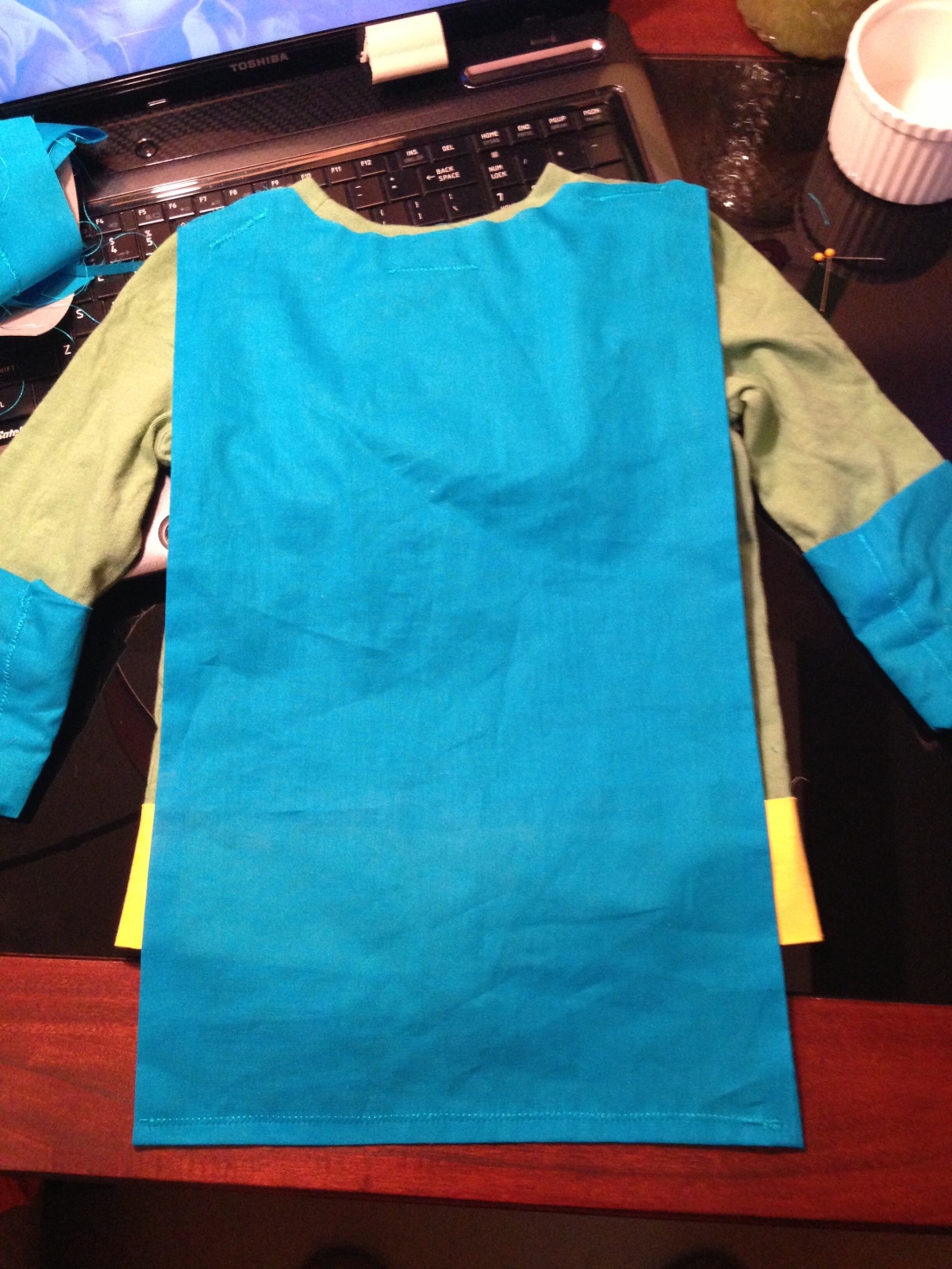 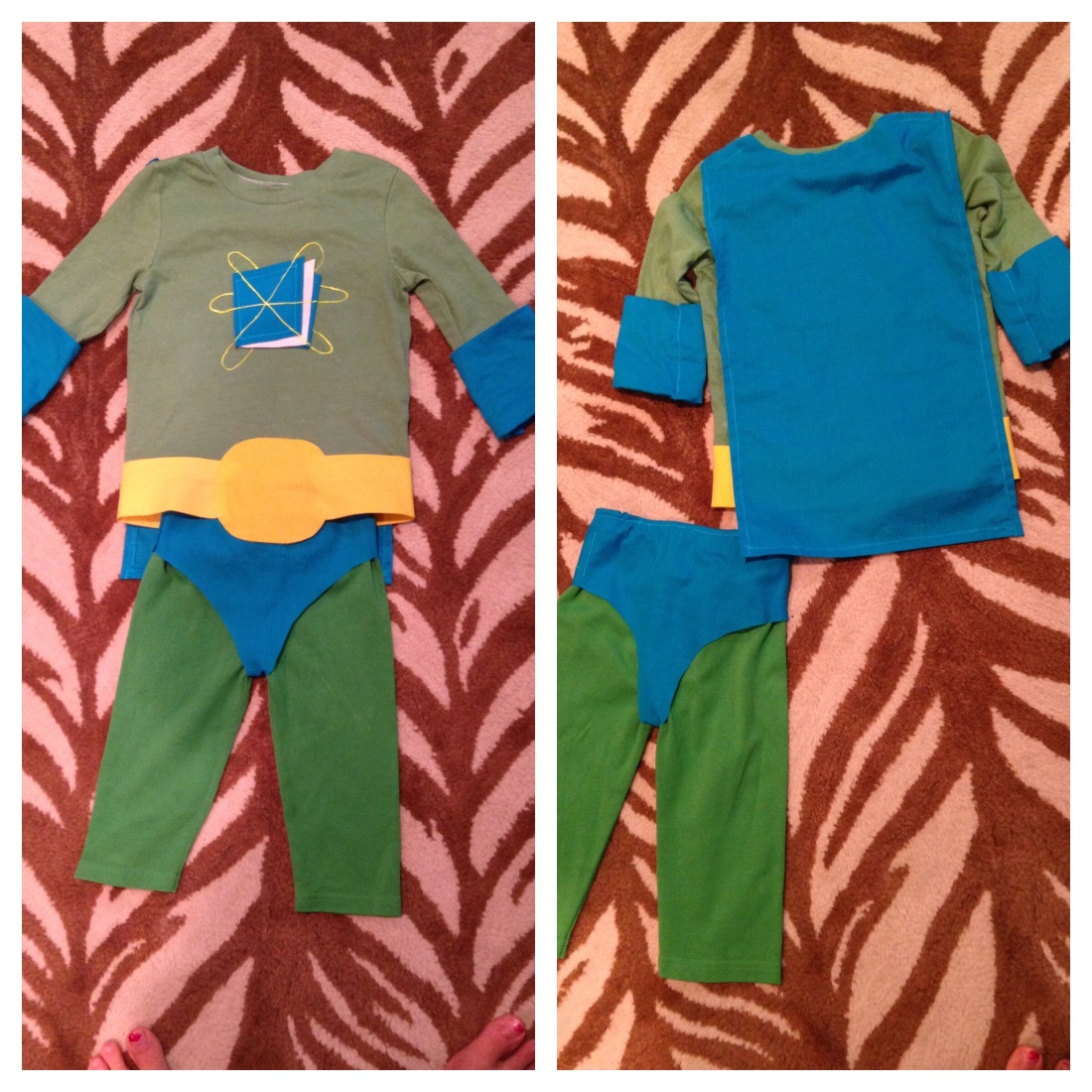 When it comes to sewing anything, I’m a complete novice and just fake it till I make it. If I get stuck replacing a needle or have tension issues (like needing to re-thread the bobbin because my tension is misbehaving), I just watch tutorials on YouTube. This costume is literally proof that sewing machines are SO GOOD now, anyone can use them!

Not gonna lie, I’m really proud of how the Spongebob Squarepants costume and Gary candy bag turned out! 😆 I’m sure this is blatantly obvious, but the base of the Spongebob costume is a box. It also involved almost zero sewing. I used a glue gun to attach everything. And since I used felt, it was pretty easy. I just took my time to lay everything out first and arrange it all before gluing anything down (and I was working off of a picture for reference, of course). I wrapped the box with the base layer of yellow similar to a wrapping a present (tucking in and folding over at the sides). The only tricky part was the nose. I sewed a rounded sleeve, cut the bottom into fourths (to create flat pieces to attach to the box), and stuffed it with pillow stuffing. I carefully cut a small slit in the base fabric under the location I wanted to attach the nose. I glued the bottom of the nose (the flat pieces) directly to the box, and the base fabric to the top of the flat pieces. 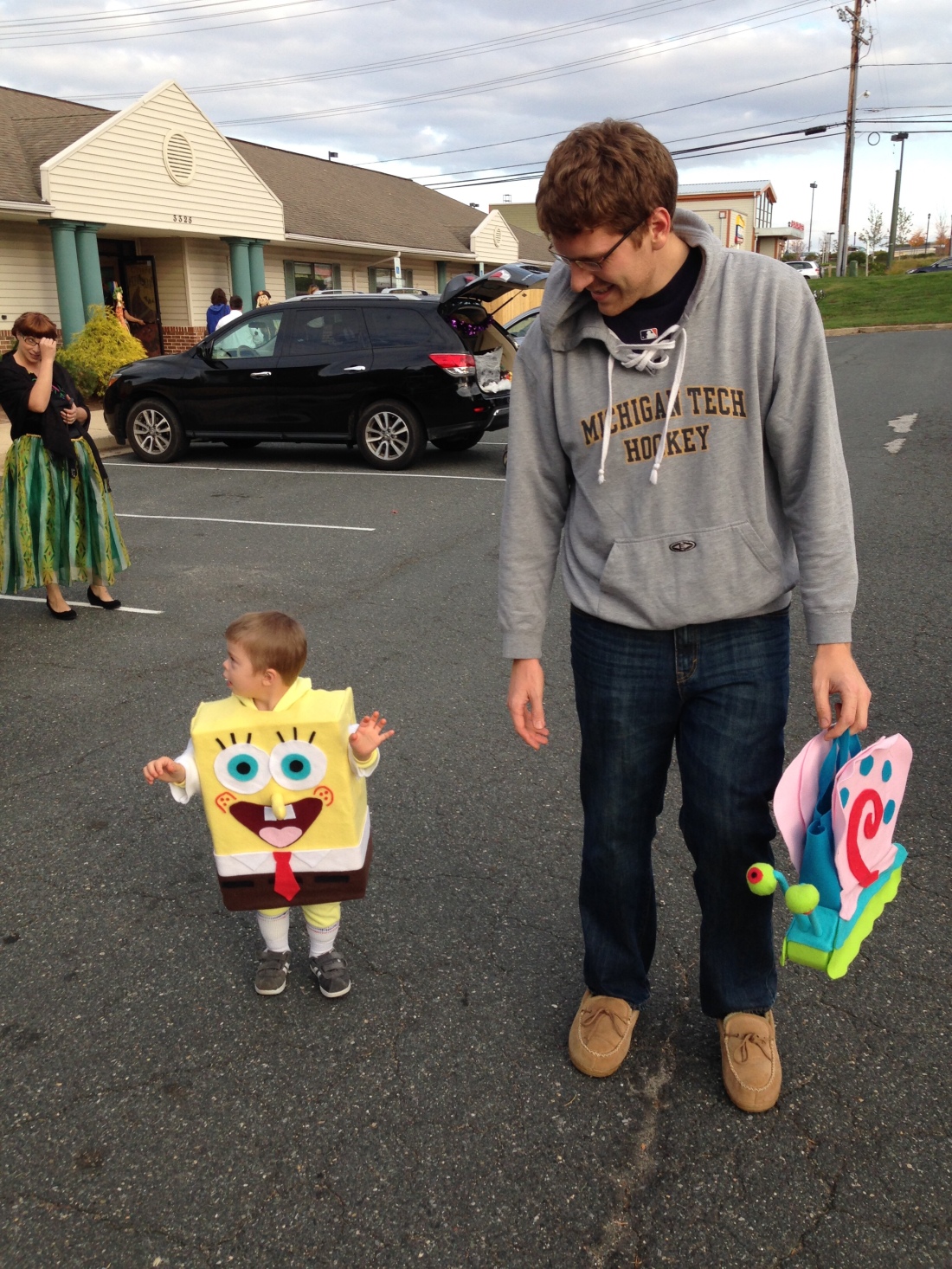 I ended up cutting a lot of the back of the box away, to ensure E had plenty of room. I also attached a lot of Velcro to the felt in the back to ensure it would stay on securely. You can see that I got a yellow, hooded sweatsuit for him to wear underneath, and used markers to give his white socks the appropriate stripes. 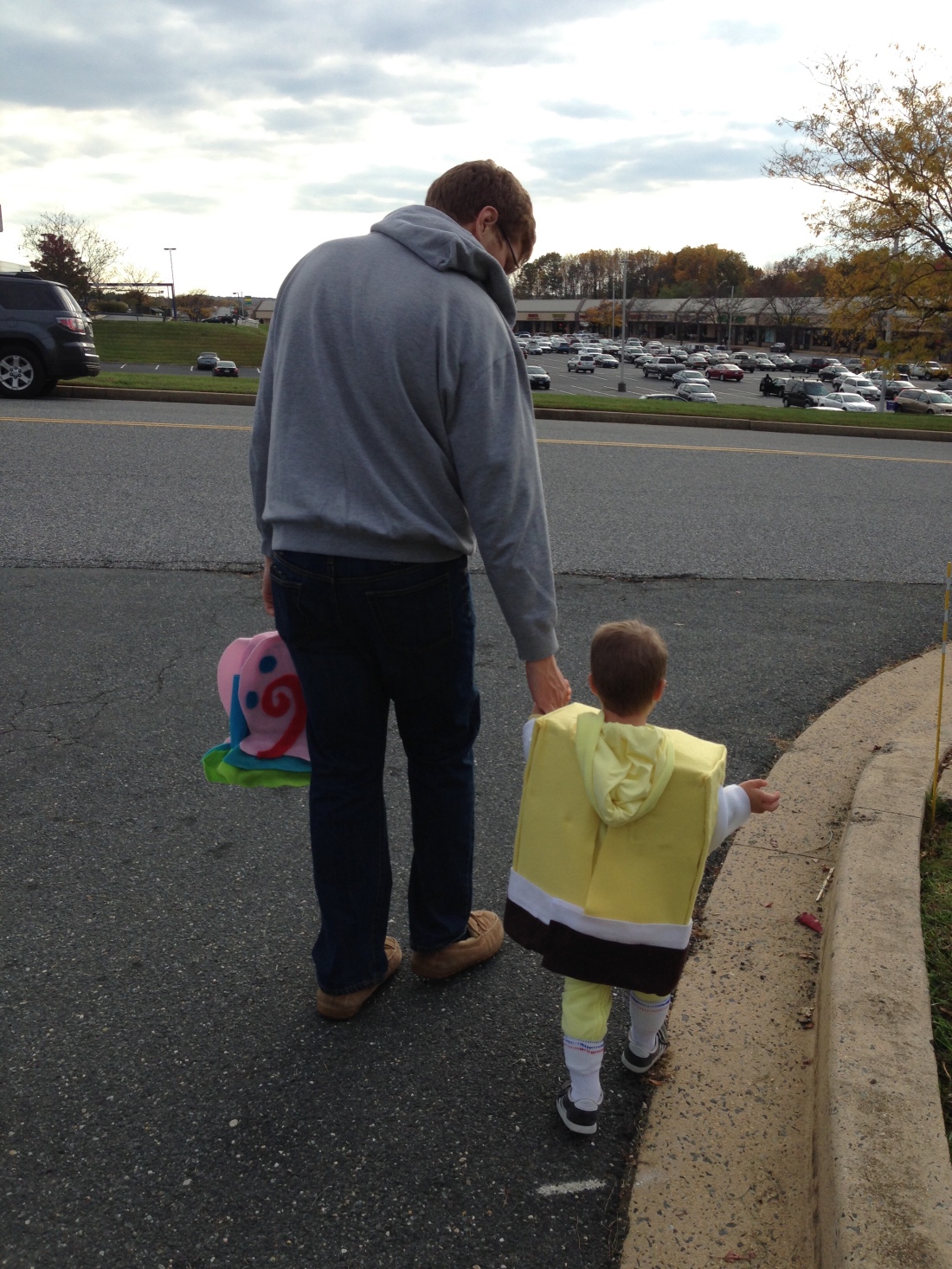 I made the Gary bag similar to putting together a puzzle. I just started with the “bag” which is hidden by the shell. I used a strip of cardboard that I bent into triangles for the front and back for the structure of his body (the “slimy” base), and hot glued green felt to it. This created a little nook, allowing me to somewhat “sandwich” the bag into the body when I attached it. I used straws for the structure of his eye stalks (I poked holes into the cardboard body/base and pushed the straws through the front “triangle” to the bottom of the base, which secured them into place). I used stuffing for his eyeballs after sewing them from felt (I left tiny holes in the base of each eye to both: turn the fabric inside out – each eye is two circles sewed together & turned inside out, and to stuff them. I then used those holes for each straw to fit into, but I had difficulty pushing them in very far because I over-stuffed them a bit) . You can see the eyeballs are a bit floppy; not overdoing it on the stuffing could help fix that…

I used two, hooded, pink onesies to create Patrick’s head and body. I cut up one of them to create the head shape, filled it with stuffing, and sewed it to the top of the hood of the other onesie. I used felt for his shorts and eyes (the eyes really make it for me!). 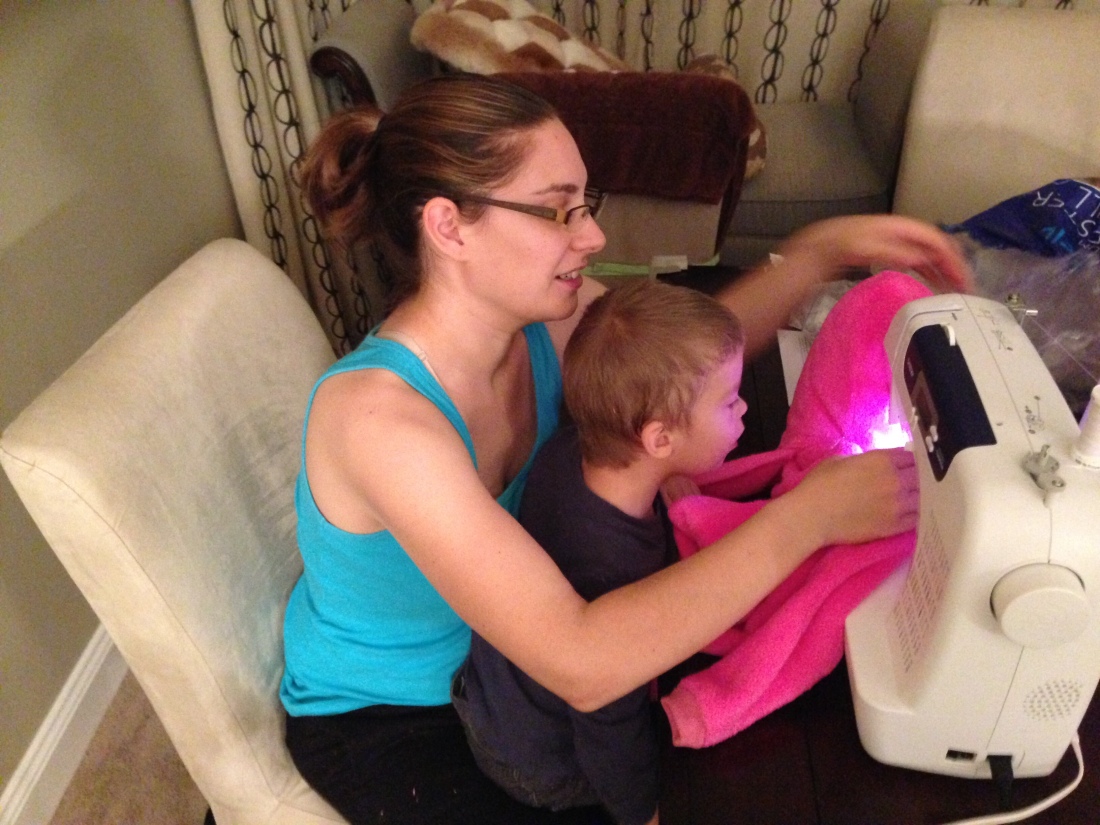 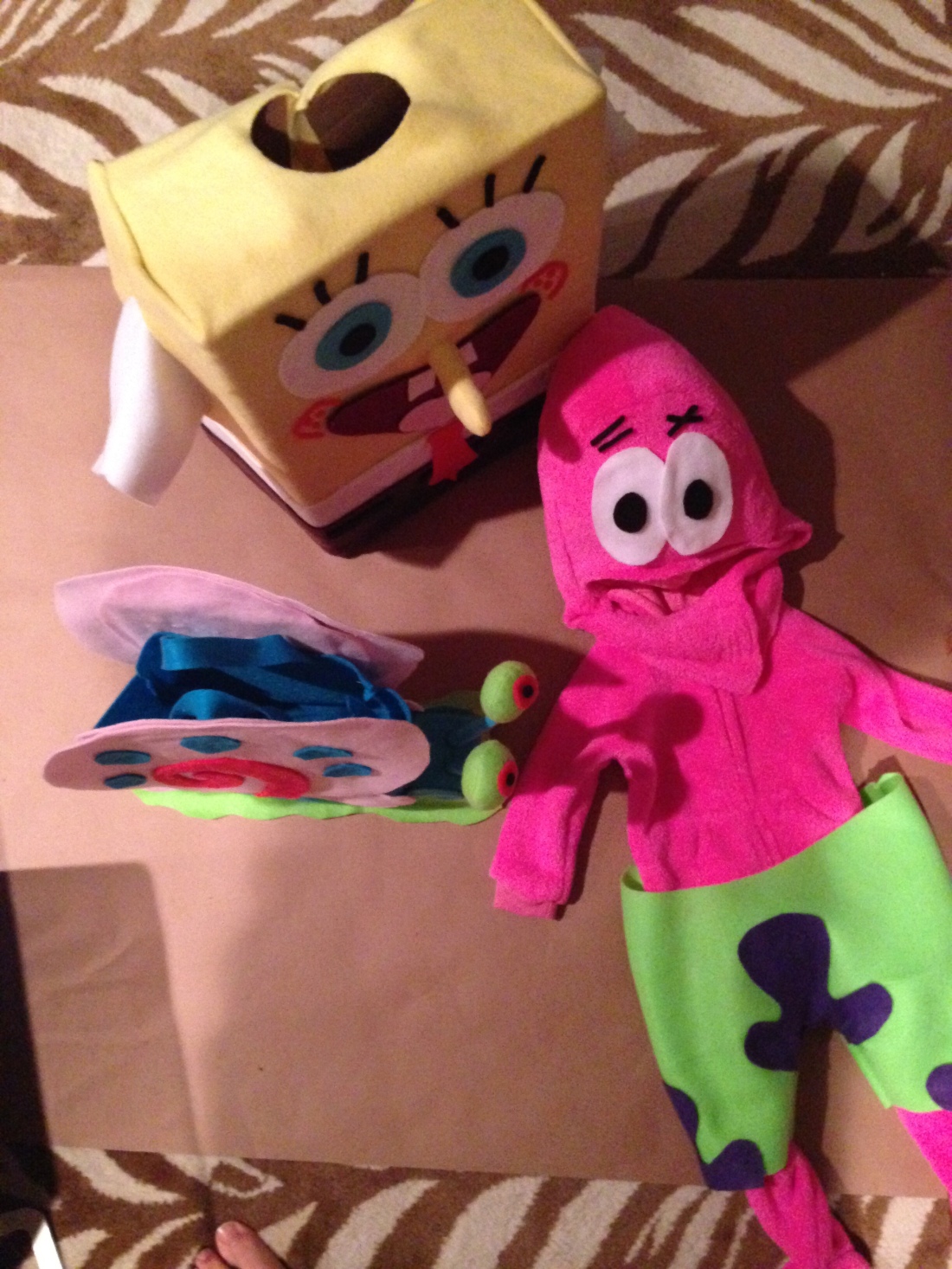 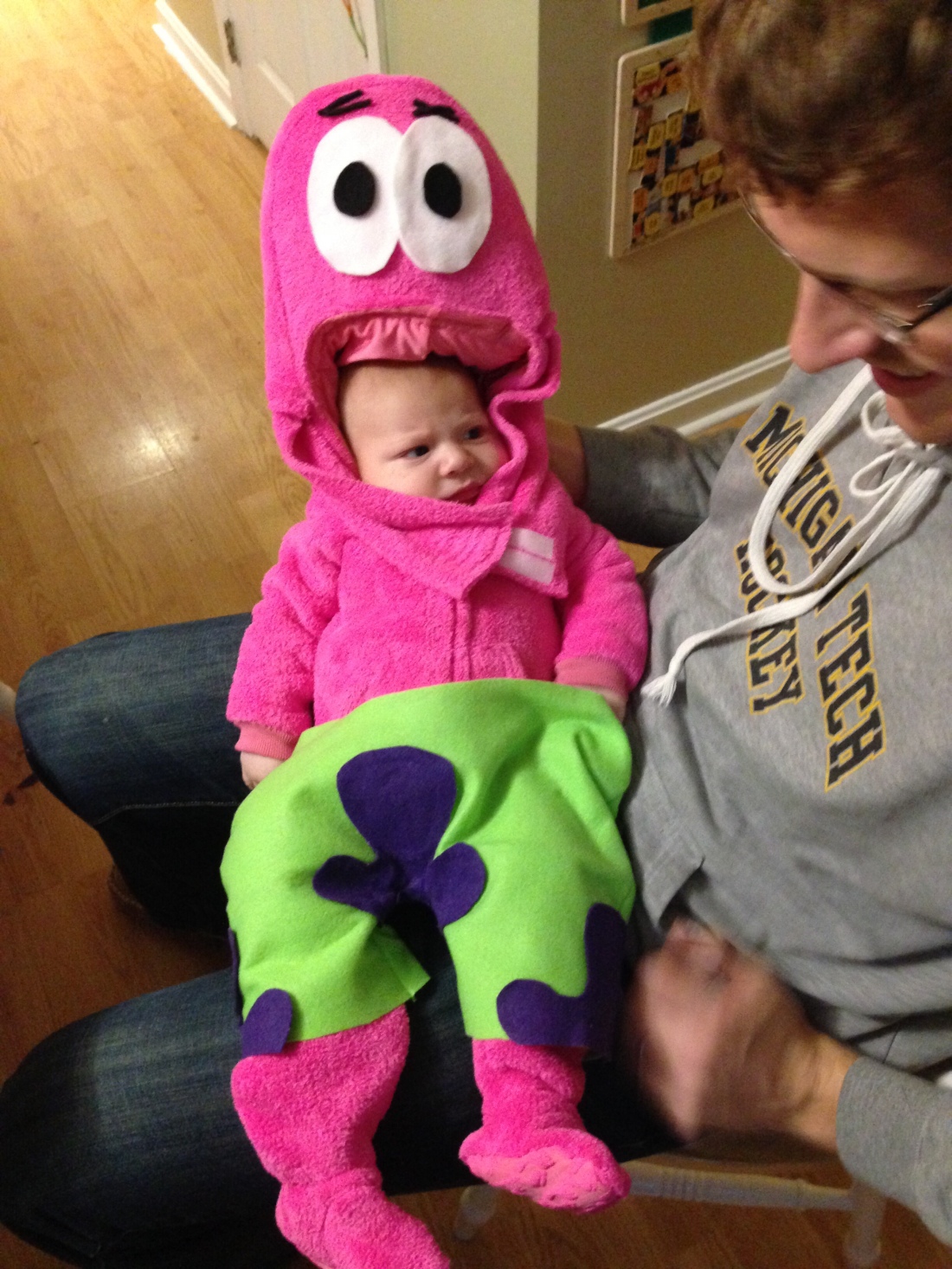 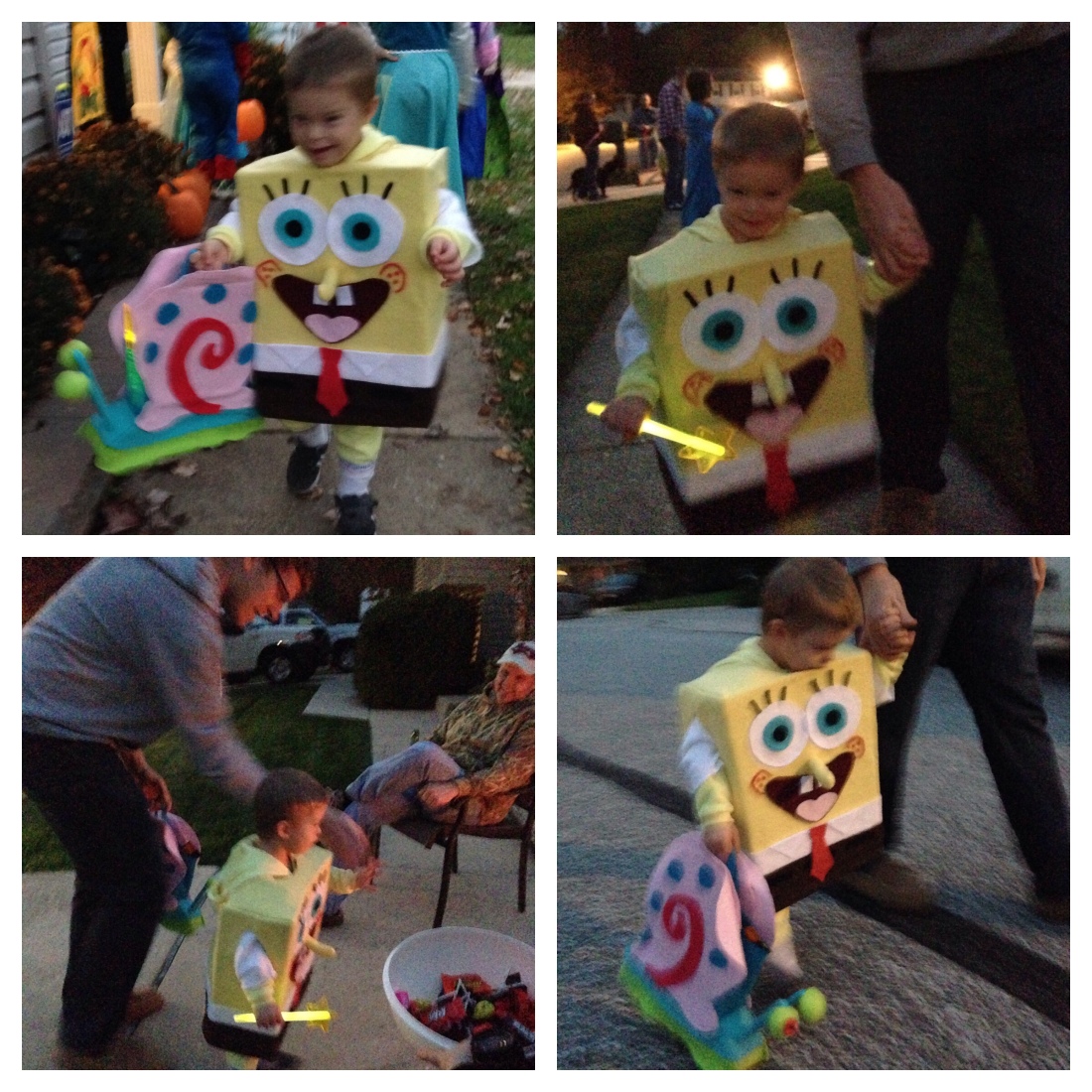 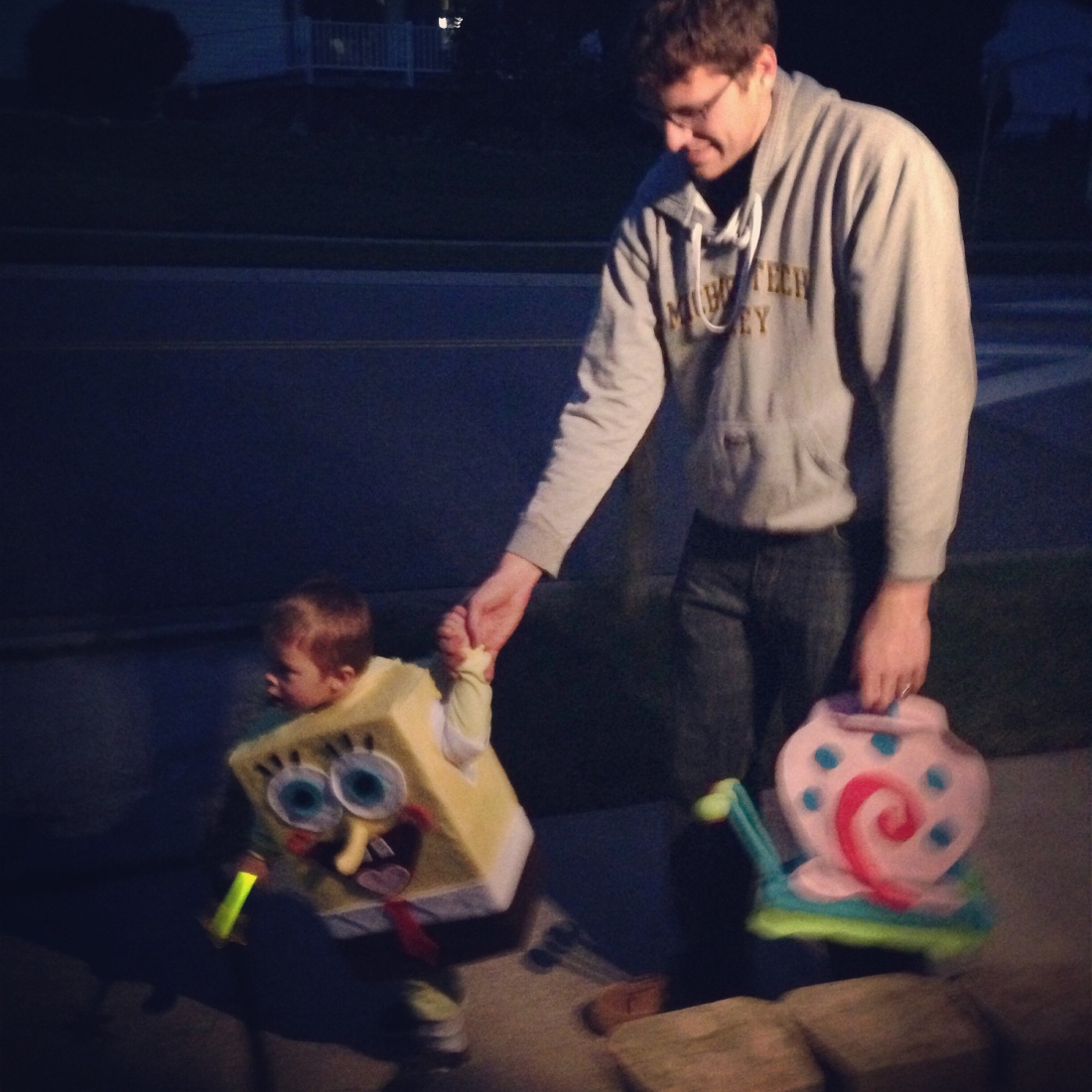 For the Monsters, Inc. costumes, I stole the tail from one Sully onesie and sewed it onto the one H wore for his costume (yes, he had 2 different Sully onesies, haha). His leggings are just knee socks! The Mike costume has a candy pouch built-in, but E ended up using his hard hat for candy. Yes, Mike was completely store bought. ☺️

I still have one more Halloween to share… It was from last year when the baby girl was not quite a year old, so I definitely had some fun with it!! And I still have to make the costumes for this year… I guess I better get on top of those this weekend!! Haha.

Here’s to the only view in my house right now that still looks clean, and for making it to Friday... 🍻🙂 Happy weekend!
Happy Easter!! 🐰⛪️ He is Risen!! 🙌 Hope everyone is having a wonderful family celebration today! Lots of hidden bunnies in this picture... The little girl wasted no time picking her bunny cinnamon roll out... ☺️😆🥰
TGIF!! 🙌 Yes, still have Christmas decor up... Let’s just say January has been busier than expected! 🤪 Here’s hoping for a productive weekend (with some down time, too)! Maybe one day this year we’ll find a minute to finally share all the projects we did in 2020...😬 #goals 😂
When you live in Maryland, big fluffy snow like we had today is really exciting! ❄️🙌 Actually, I think I posted almost this exact picture a year ago (possibly to the day). 😂 Hope locals got to get outside & play today! 🤗 Also, who remembers our old windows with white frames - or when we gabled these dormer windows?! Swipe 👈 for some flashbacks... 😁
TGIF! Is it just me or was this a loooooong week?! Looking forward to snuggling on the couch in front of the fire, and maybe finally addressing our Christmas cards while watching a Christmas movie this weekend... With some wine, obviously. 😁😂🎄🍷
Does anyone decorate their bedroom for Christmas? We typically don’t, but I decided to do our Christmas card photos in here this year. Now that it’s decorated I kind of love it! 😆 Also, this is Winston’s “I don’t care if you pet me” pose - but really, he’s begging me to pet him... 🤣