Hey there! This week I decided it’s time to share the built-ins and new fireplace surround in our living room – at least our current progress. Last spring we discovered termites by the fireplace, which moved this project to the top of our list.

We already have a wood burning fireplace in our den, so we decided to convert this one to a gas fireplace. After getting the chimney inspected to make sure it was ready for the conversion, we settled on a Heat N Glo, gas fireplace insert (the Escape model).

It took a couple of months to finish installation, because we had to have a gas line and electrical run to the box, in order for the insert to be installed. (We bought it in April, and finally had it installed in the beginning of August).

Once installation was complete, we picked out tile for a surround, and decided we wanted a live edge slab of wood for the mantel. Above the mantel, we decided to do a faux shiplap treatment, using the same material and process as we did for the powder room.

These are the tiles we considered: 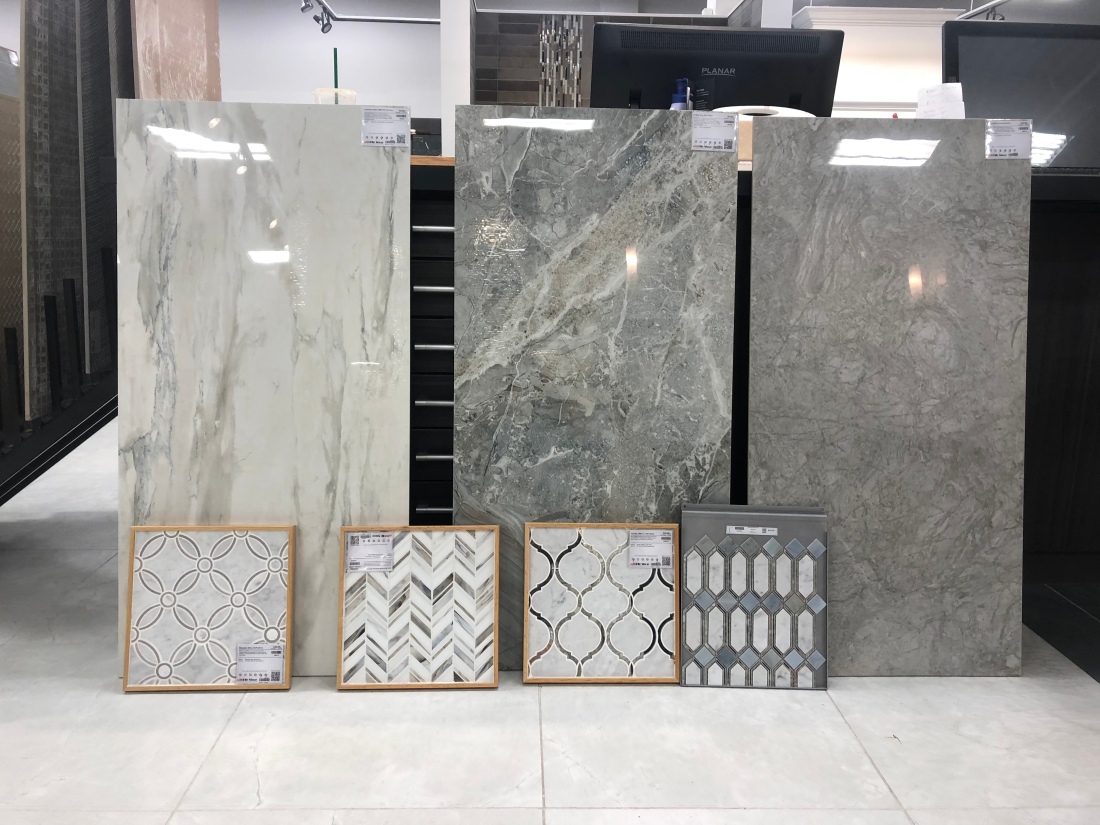 We finally chose Alato Beachwalk Chevron because in-person, it looks like it has capiz shells in it (so pretty!!!); plus, the white and gray colors tie together the white built-ins with the gray slate hearth tiles (originally, we considered replacing those with one of the larger slabs pictured above, but they were way too small for the space).

Funny story about the mantel – we asked a friend for sawmill recommendations, and he gave some, but said we could check his stash first. Turns out that a mutual friend had a tree cut down and they milled the wood, so we got the chance to look through some of those slabs for our mantel! He had a piece that was PERFECT – long enough, wide enough, and thick enough! Here’s a picture of our friend and the hubs getting a straight/clean edge for the piece of the slab that would sit against the wall. 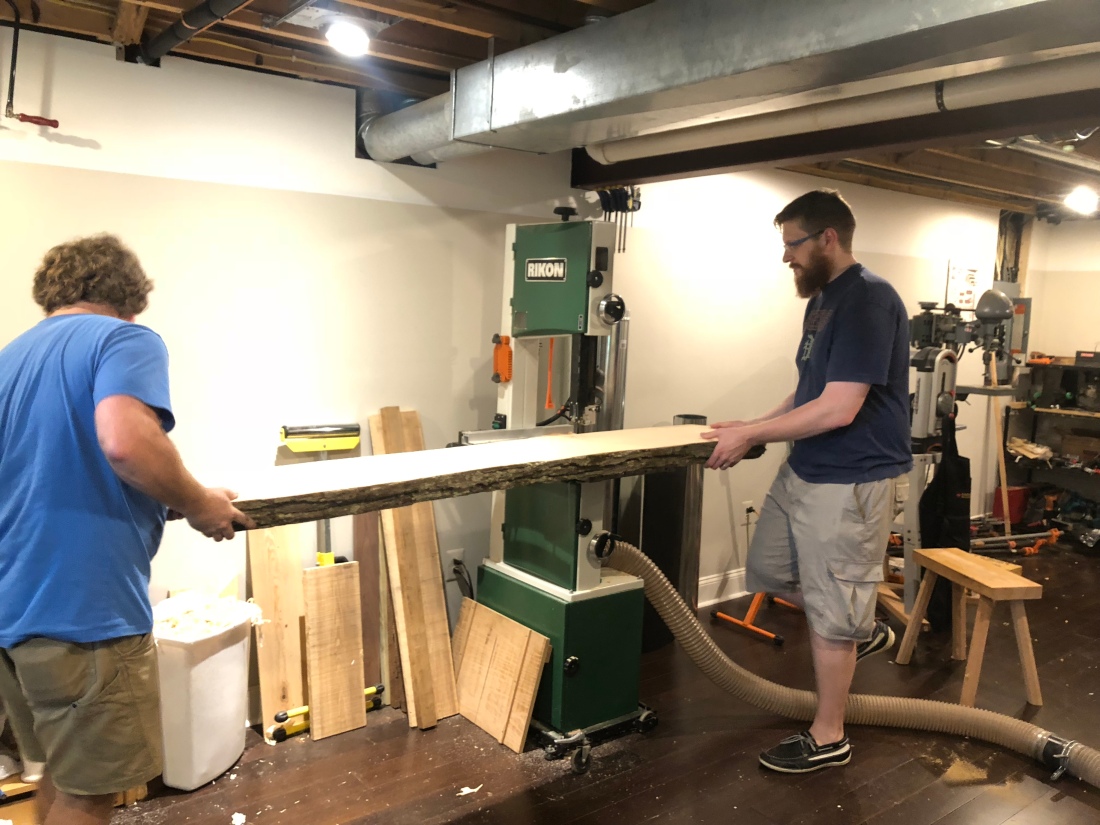 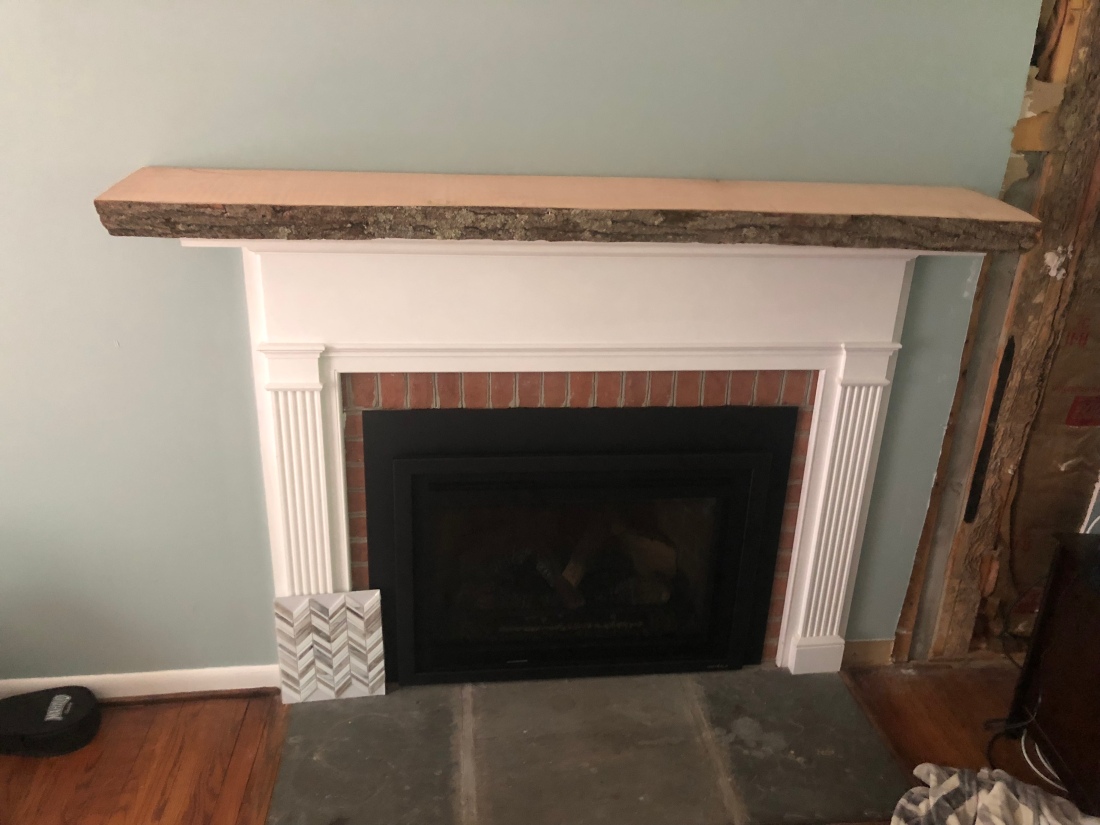 Once we had the materials, the hubs got to work creating the built-ins. He used cabinet grade wood and used a single piece of wood cut into an L-shape for each side, then added shelves and supports… 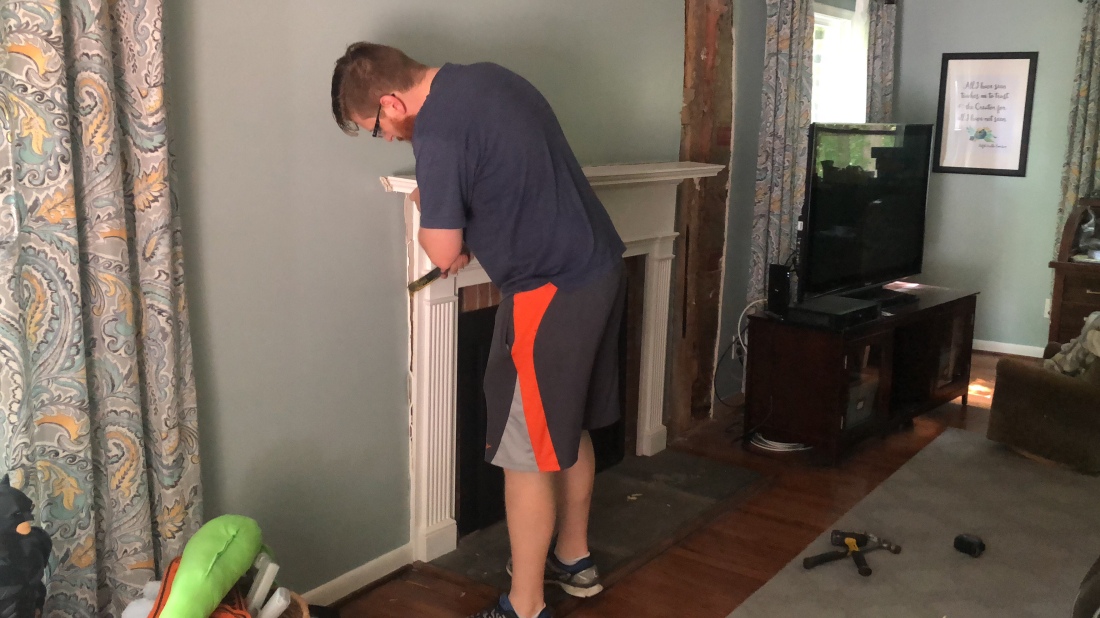 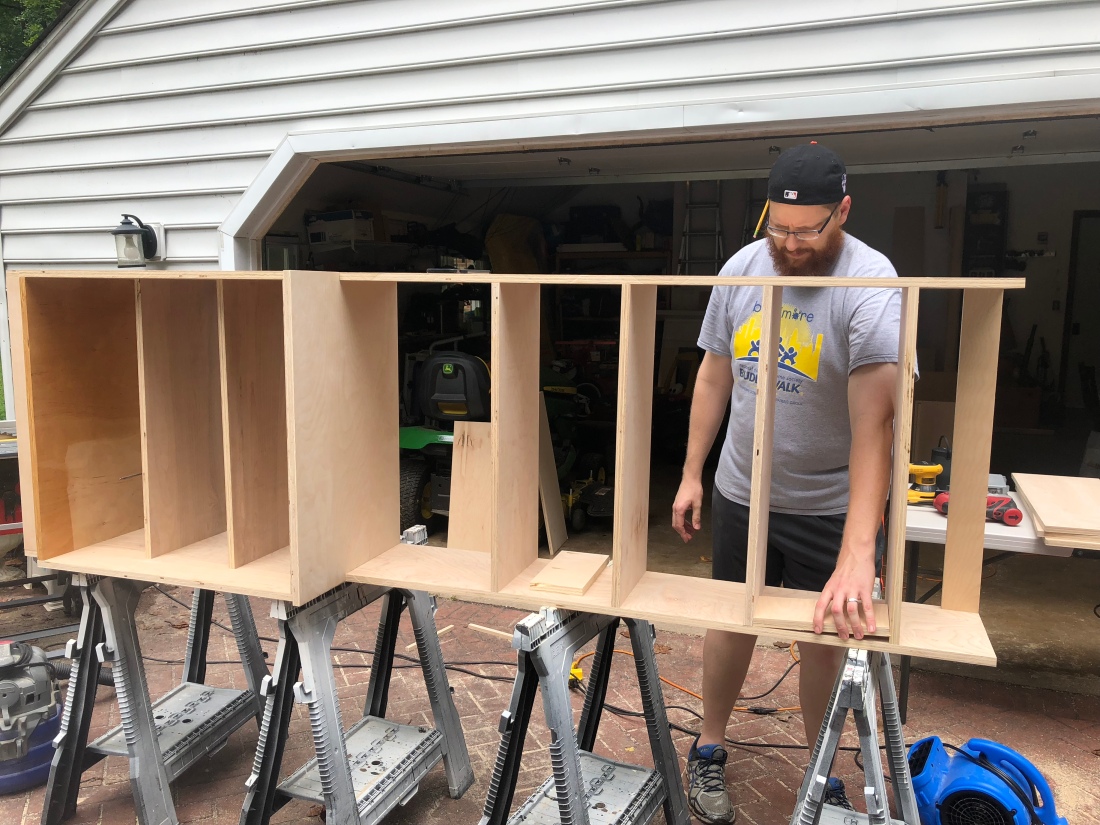 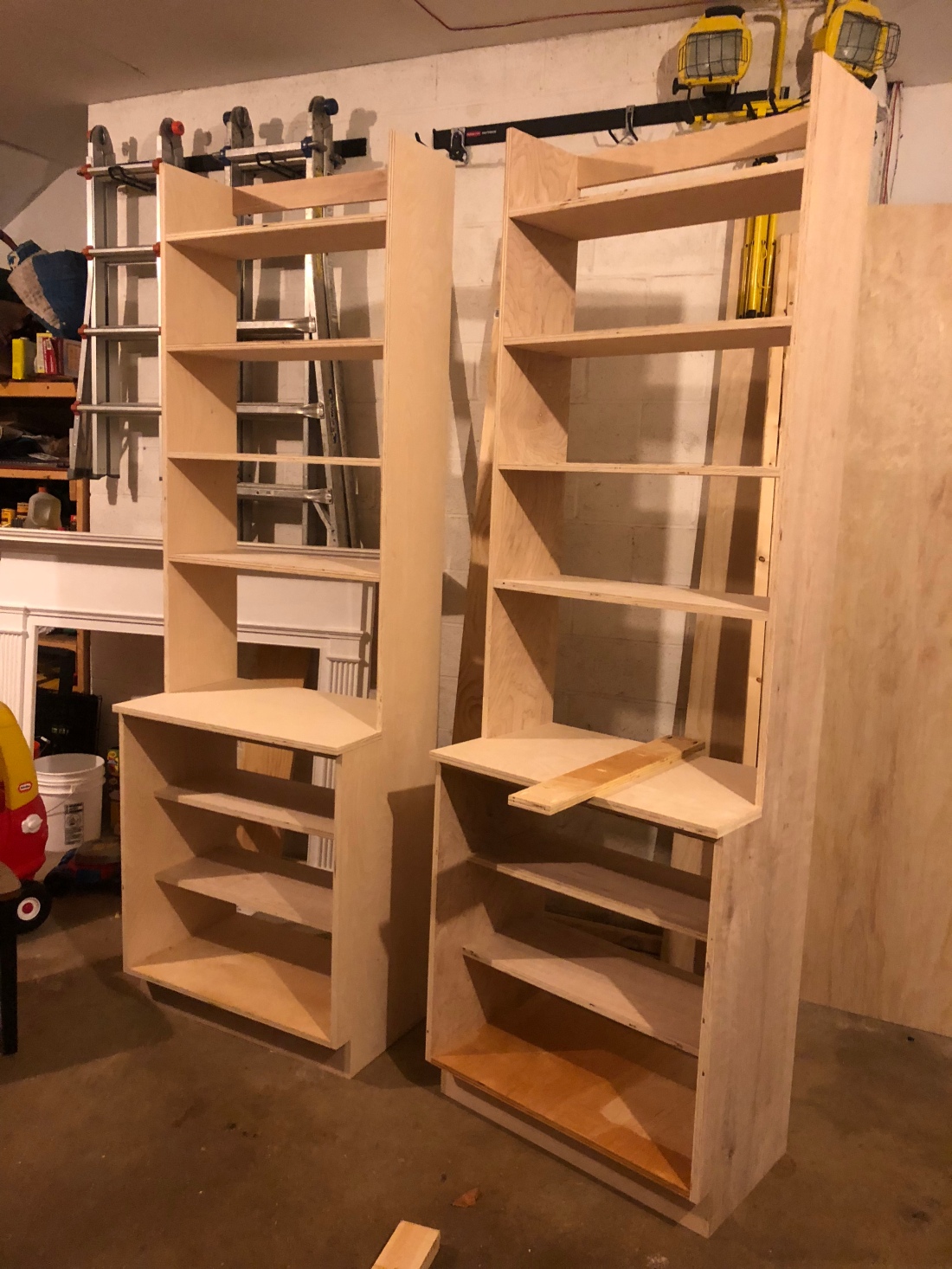 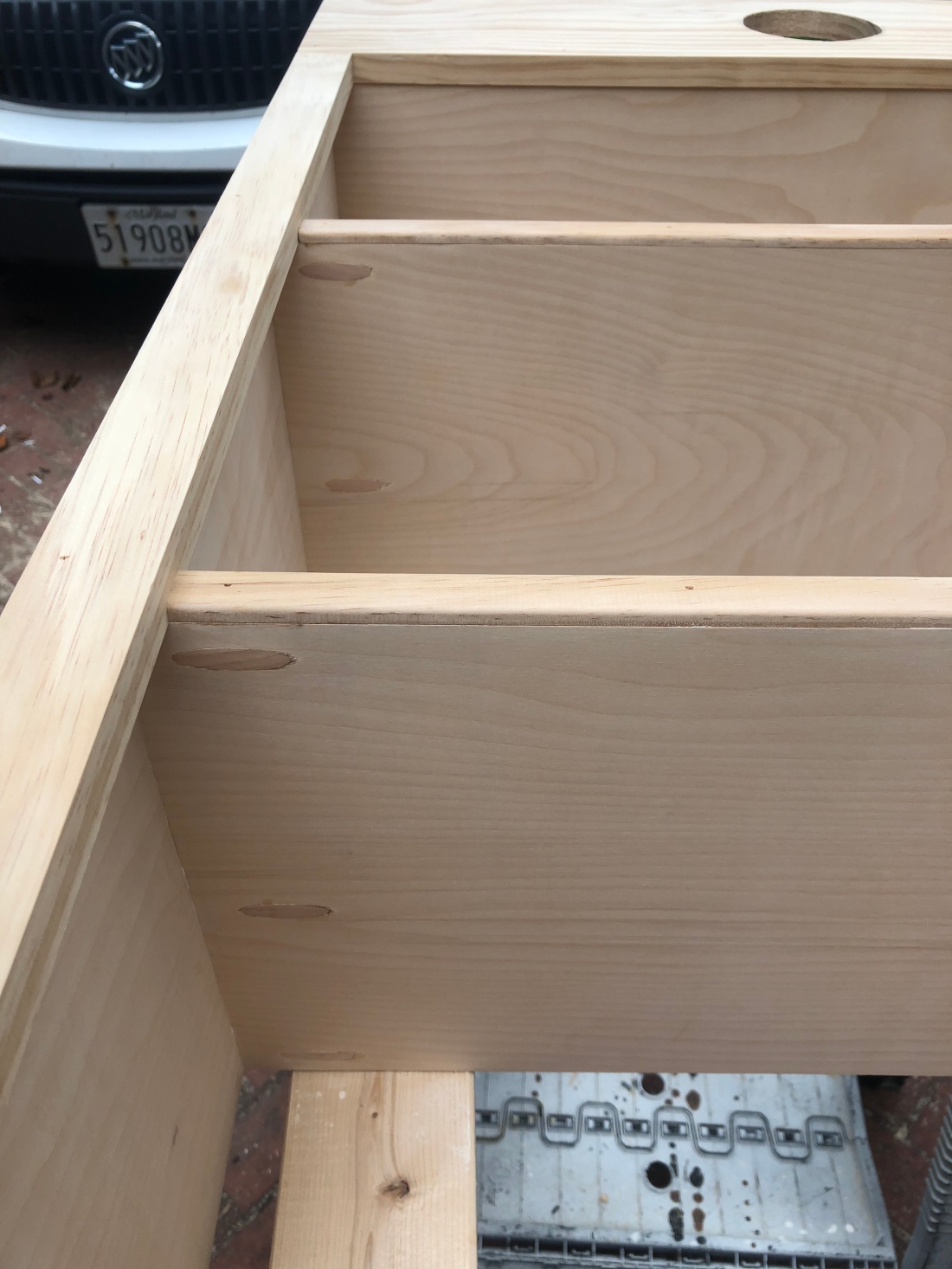 He used veneer for the rough edges that would be exposed, except for the front of each shelf. He used simple trim for the shelves (pictured above), and a decorative trim for the large shelf that doubles as the top of each cabinet. The process to sand the cabinets and apply the veneer was the same as for the custom closet organizers he built for our last house. Except this time he painted them (snow white and whale gray) instead of staining them. 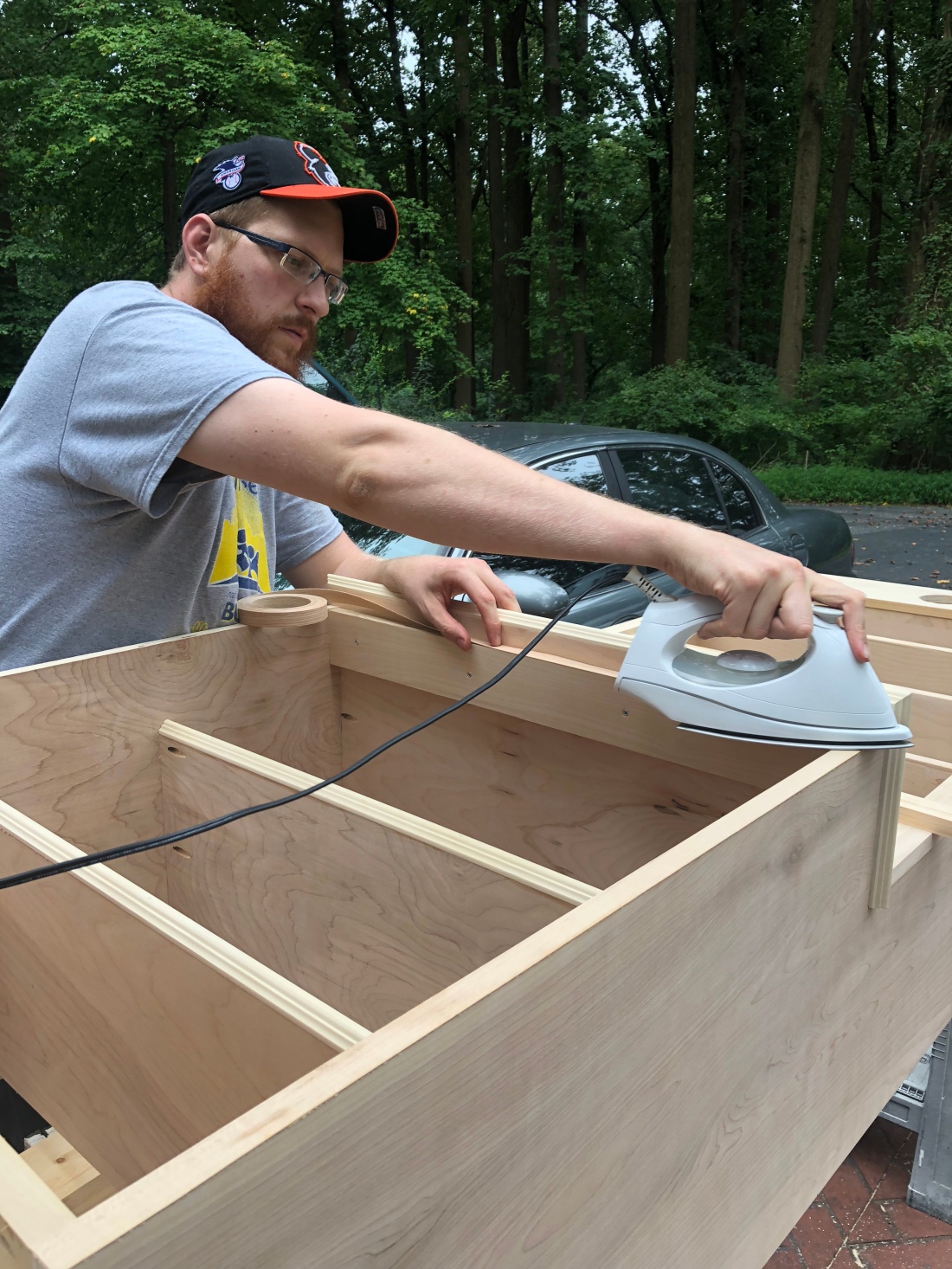 We painted the inside of each the cabinet gray to help hide the contents. The cabinet doors (not shown because they’re still not finished) are shaker style, with radiator screen in the middle to allow TV components to breathe. Here’s an inspiration photo for how the cabinet doors will look when finished (except they’ll be flush to the top of each cabinet and will be painted white). This was also my inspiration to do the shiplap treatment behind the TV! ☺️

After the built-ins were created (before the back pieces were installed), the hubs covered the brick fireplace surround with mortar to prep it for tile.

We used a cardboard template (representing our TV) to help finalize our mantel placement. This was done before tiling, so we knew how far above the fireplace we the hubs had to tile. I was in charge of the tile pattern – believe it or not, there is one… 😁 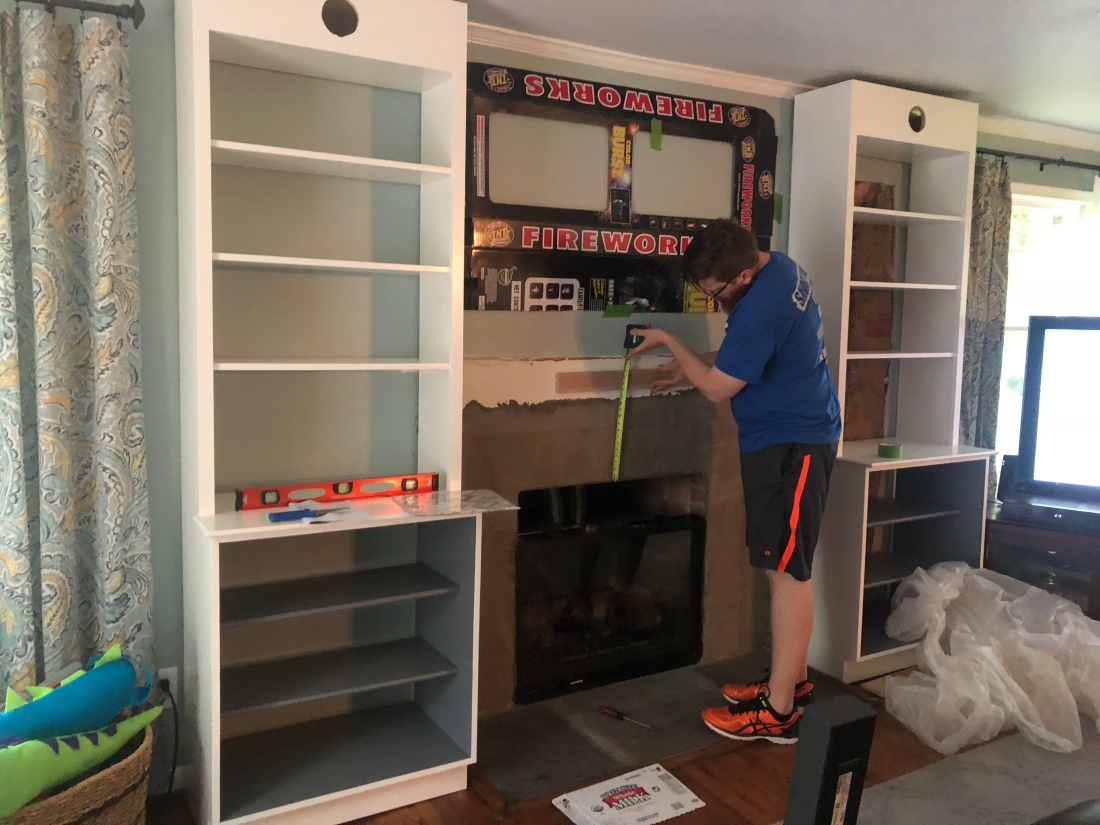 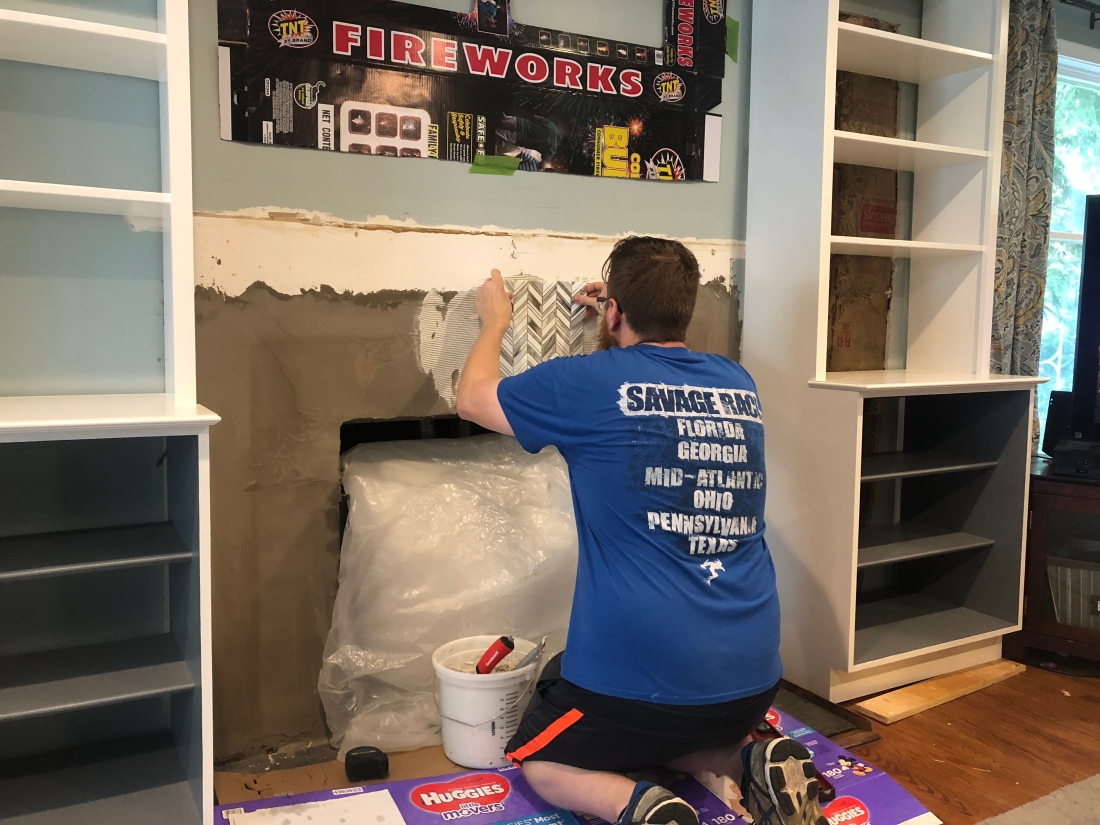 You can see that we had to use shims to level the built-ins before securing them to the wall, because the floor isn’t even…

The hubs routed wiring behind the TV and the right cabinet, to allow us to hide the power and cable cords. Pictured below is routing the hole for the speaker bar wire to go from the TV to the speaker, behind the shiplap treatment (routed through the drywall, instead of putting a hole in the wall header above the fireplace 😁). 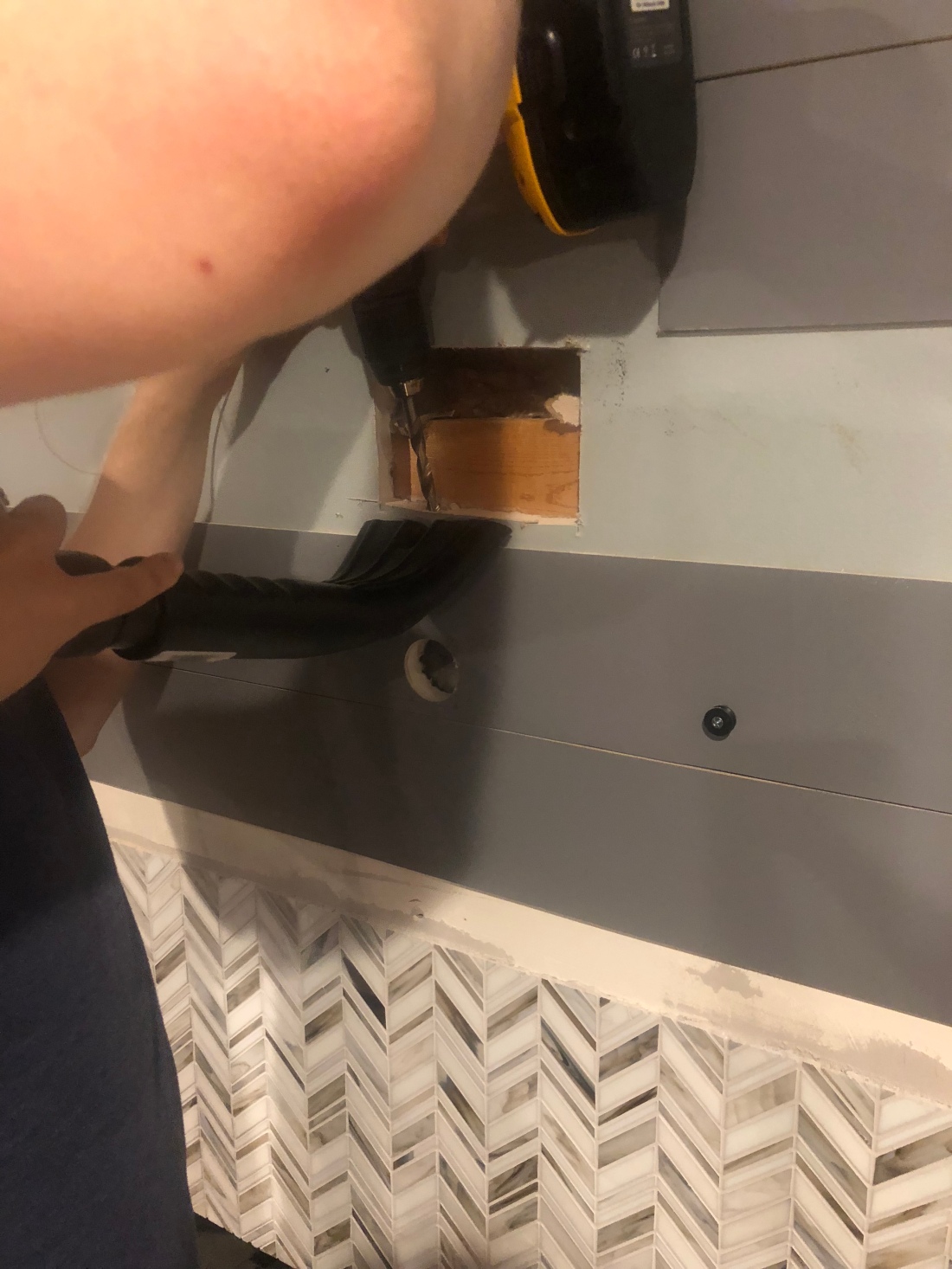 Our electrical box is in a basement room directly below the right cabinet, which is why it was easy enough to route everything through that cabinet. This also made it easy to add lighting at the top of each cabinet – the light switch for the sconces is on a dimmer, on the outside of the right cabinet. It’s very fancy, haha!

Speaking of lighting, I had a hard time choosing between sconces with a metal shade versus a glass shade. I got each and it became blatantly obvious that the metal shades were way too top heavy, so I returned those. 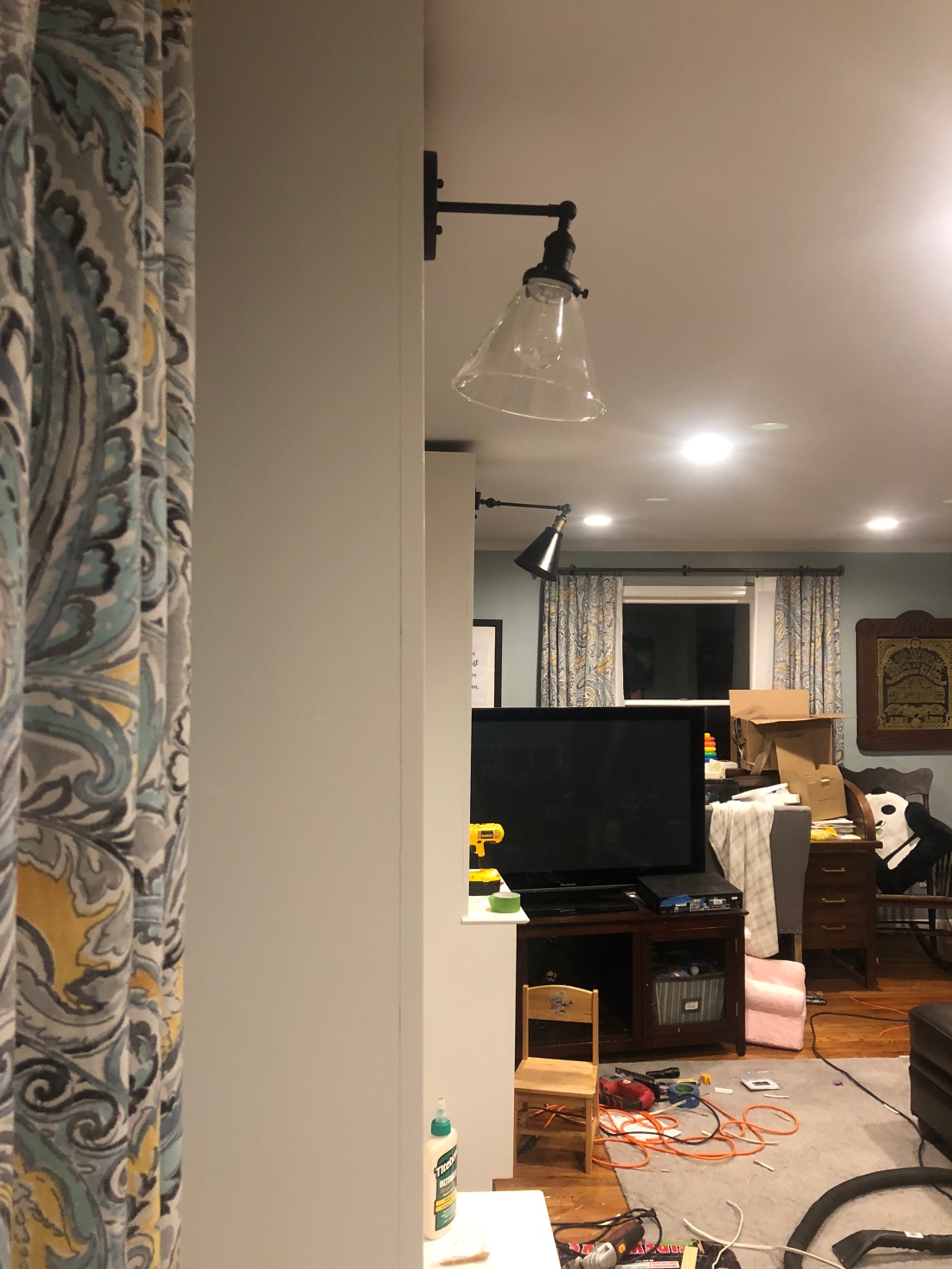 To make the built-ins look “built-in” he continued the crown and baseboard molding around the top and bottom edges. 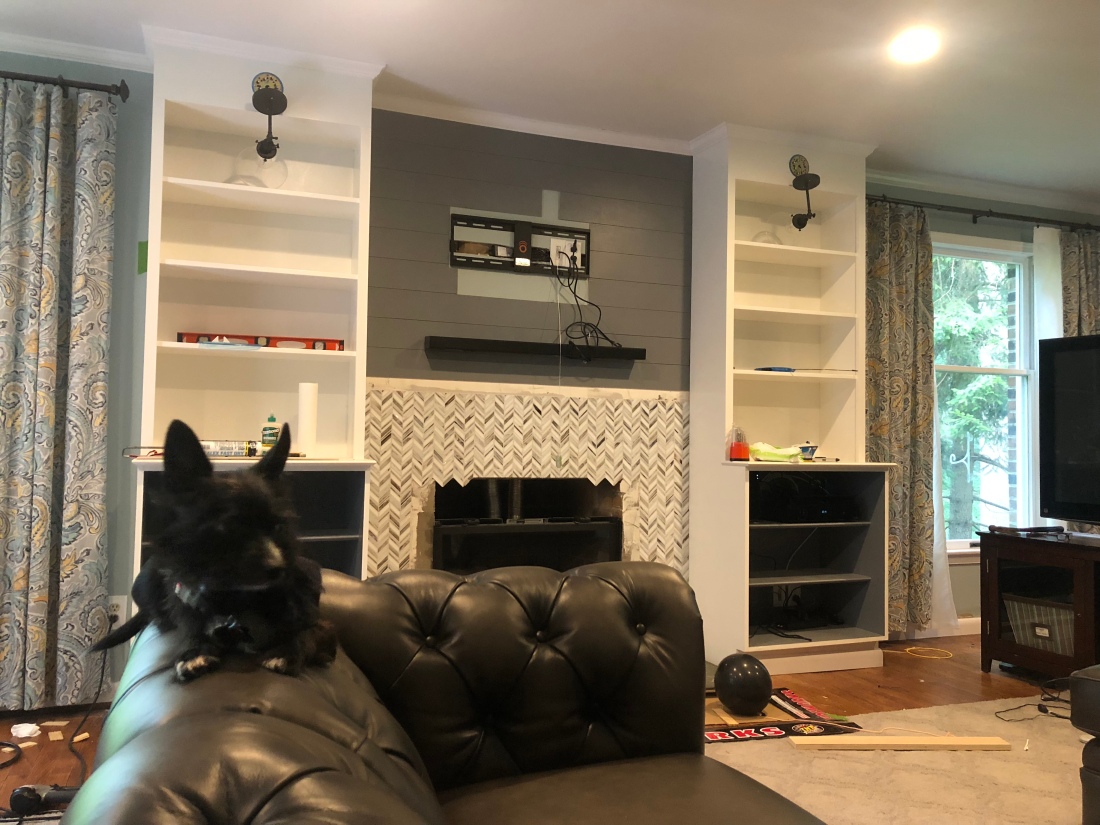 To remove the bark from the mantel, the hubs used a pull knife. Then he sanded the mantel until it was insanely smooth (starting with a low grit sandpaper – around 80, and moving gradually to higher grit – around 330). The goal here was to remove the saw marks made during the milling process. 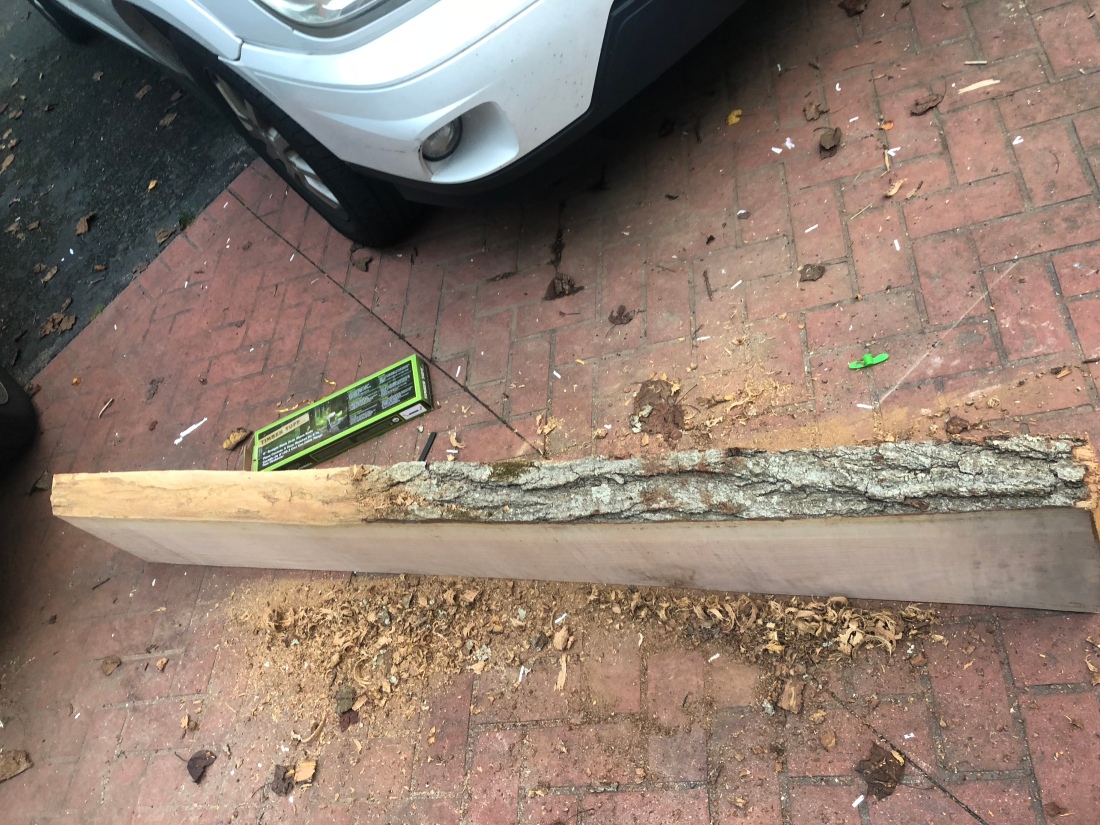 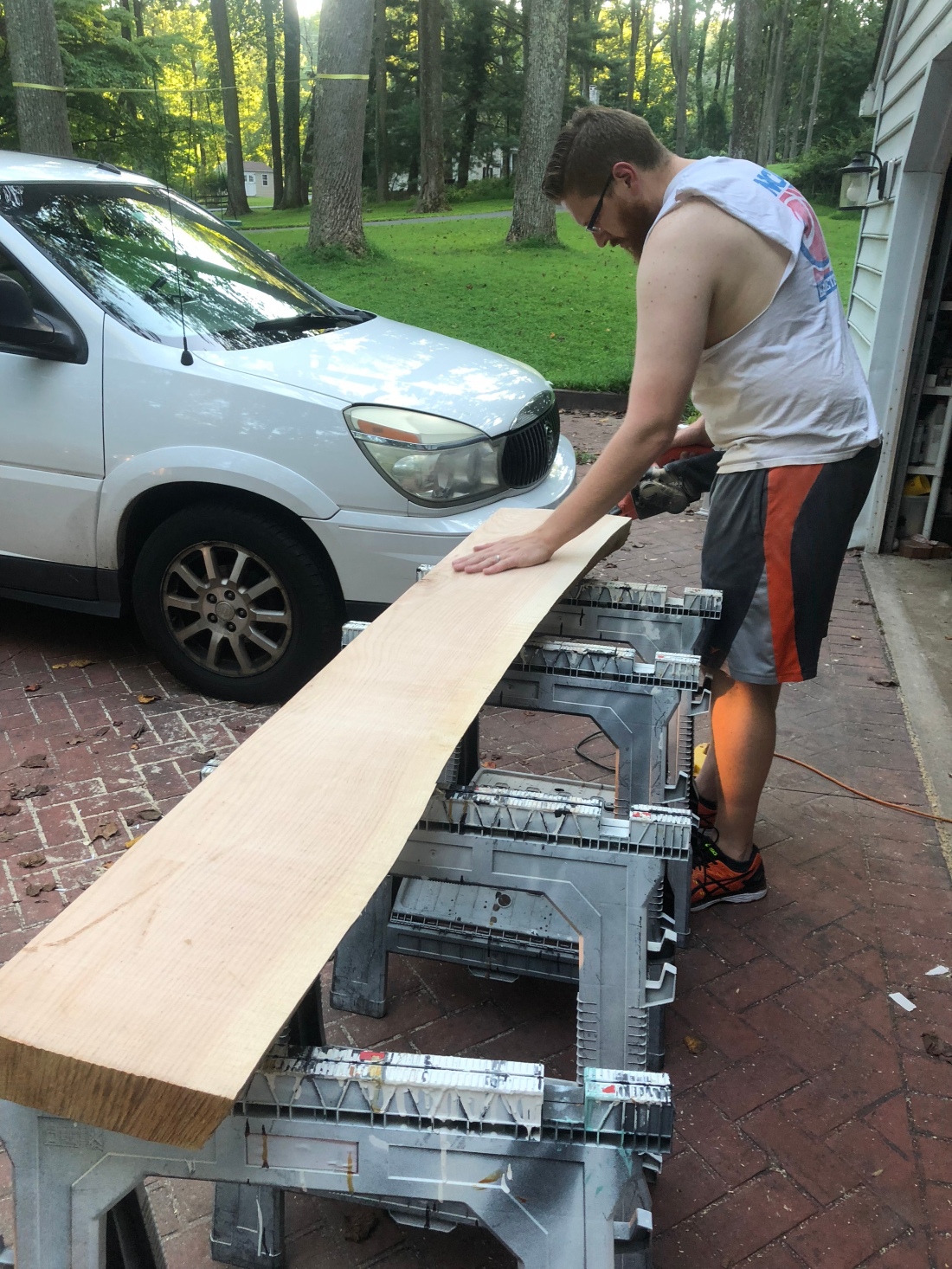 To install the mantel, the hubs used this mounting bracket, shown below. 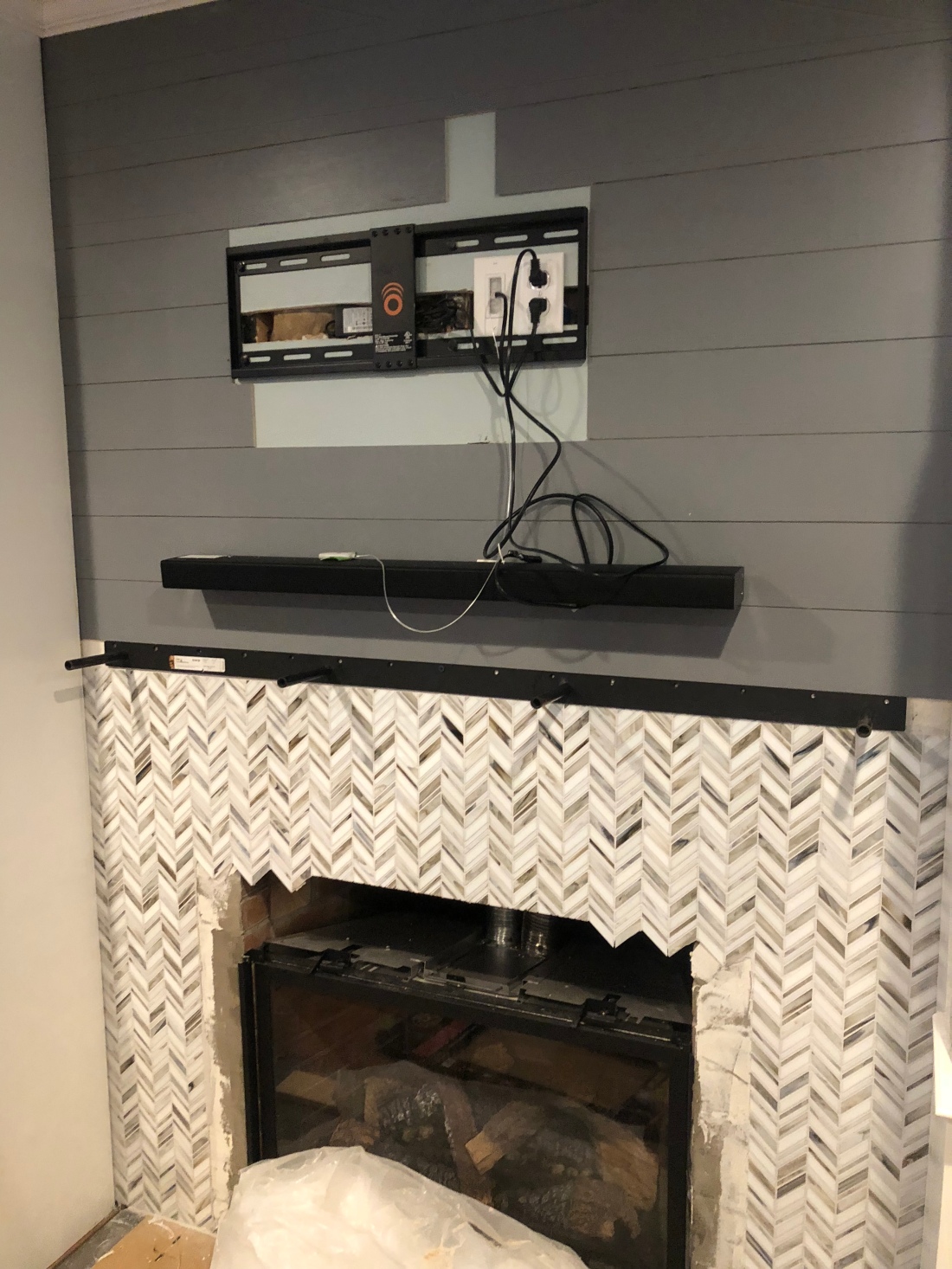 To protect the mantel, we applied 3 coats of clear, high gloss polyurethane. I waited about a month before setting anything on it, just to make sure it was fully cured! He finished everything the day before our youngest son’s 4th birthday party (yes, we were cutting it close!!!). Here’s the first opportunity I had to decorate everything (this was taken a few weeks later, in late September):

This next picture shows off the live edge of the mantel. So pretty!! ☺️

I had a lot of fun decorating the mantel for Christmas this year, too! Here she is in all of her Christmas cheer glory (along with a rare moment of all the kids getting along, haha)…

And of course, nothing is cozier than Christmas with a fire going… ☺️

I have REALLY enjoyed being able to turn on the fire with the push of a button! I don’t even mind that the cabinet doors aren’t finished yet. Buuuut, I’m really hoping it gets done this year, hence putting it on my list of 2019 goals…

So… anyone else knock out 95% of a project within a month (if you start counting after the fireplace insert was installed), then take months to finally finish the project? Just us?! 😂

4 thoughts on “The Never-Ending Fireplace and Built-Ins Project…”