Hard to believe we’re well into March… In honor of being so close to St. Patrick’s Day, I thought I would post about our past trip to Ireland!  We spent a week in Ireland, so this week I’ll cover our adventures in Western Ireland, and next week I’ll cover Dublin and Northern Ireland.

We flew into Shannon, Ireland from Edinburgh, Scotland (Ireland was actually the second leg of a 2 week trip to the U.K. and Ireland).

We rented a car, and stayed at a bed and breakfast (Heaton’s Guesthouse) in Dingle for our “home base” in Western Ireland.  I have to start by saying, this B&B was incredible!  It was situated overlooking the Dingle Bay, the rooms were very nice, and the spread for breakfast was insane!  Our first morning for breakfast we were busy loading our plates with fruit, yogurt, etc., and then we were handed menu’s.  Umm… okay!  The hubby got a traditional Irish breakfast one day, so we were able to try blood sausage (he also got hagus from a place in Scotland – we’re big on trying the local fare)!  I got boring (but delicious) waffles… Anyway, this post is mainly about places to check out if you’re traveling to Western Ireland, not food – although while on the topic, we had amazing lamb in western Ireland, too… ☺️

But speaking of the amazing view from our B&B, this was it…

Dingle itself is an adorable little town, too. Here are some pictures from around the village:

Dingle also has a cute Harbor… 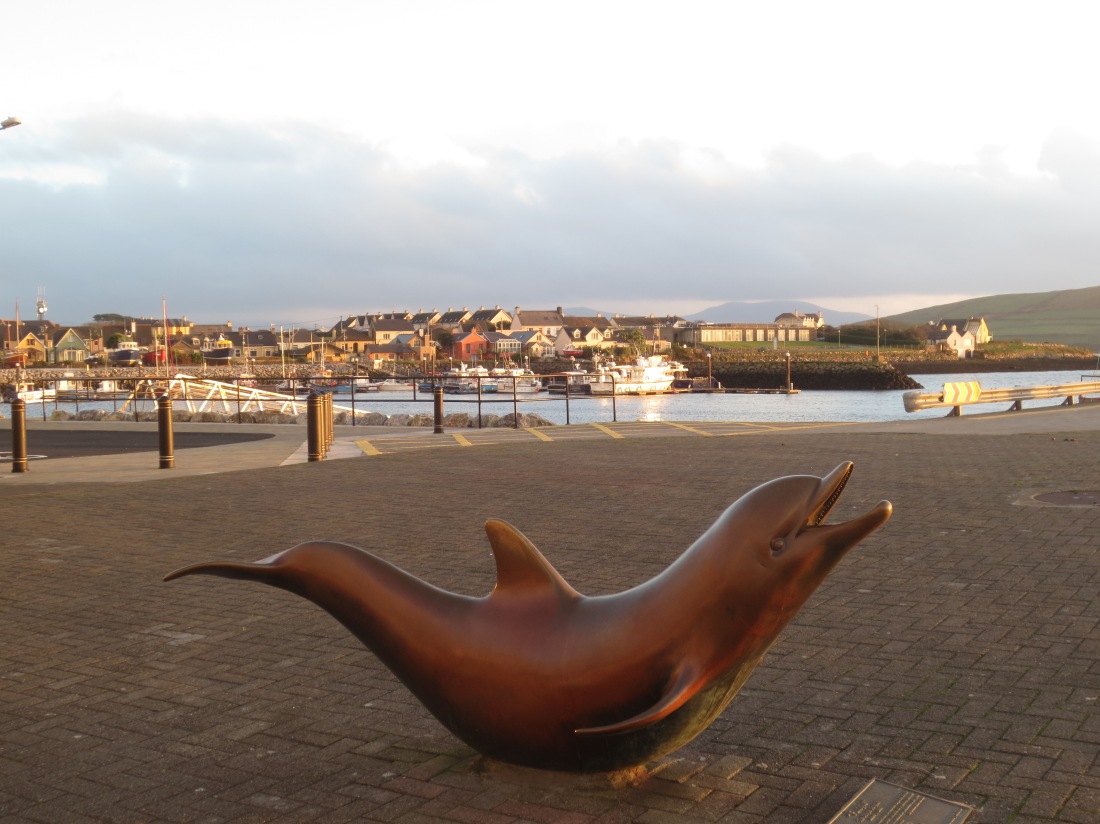 Our little guy was only 1.5 years old on this trip (so hard to believe he’s turning 8 years old in month)!

My favorite activity local to Dingle though was taking a drive on Slea Head Drive.  It’s a circular route starting in Dingle, that passes by many attractions and has great views of the western end of the Dingle peninsula.  We stopped to take pictures a LOT along the drive… 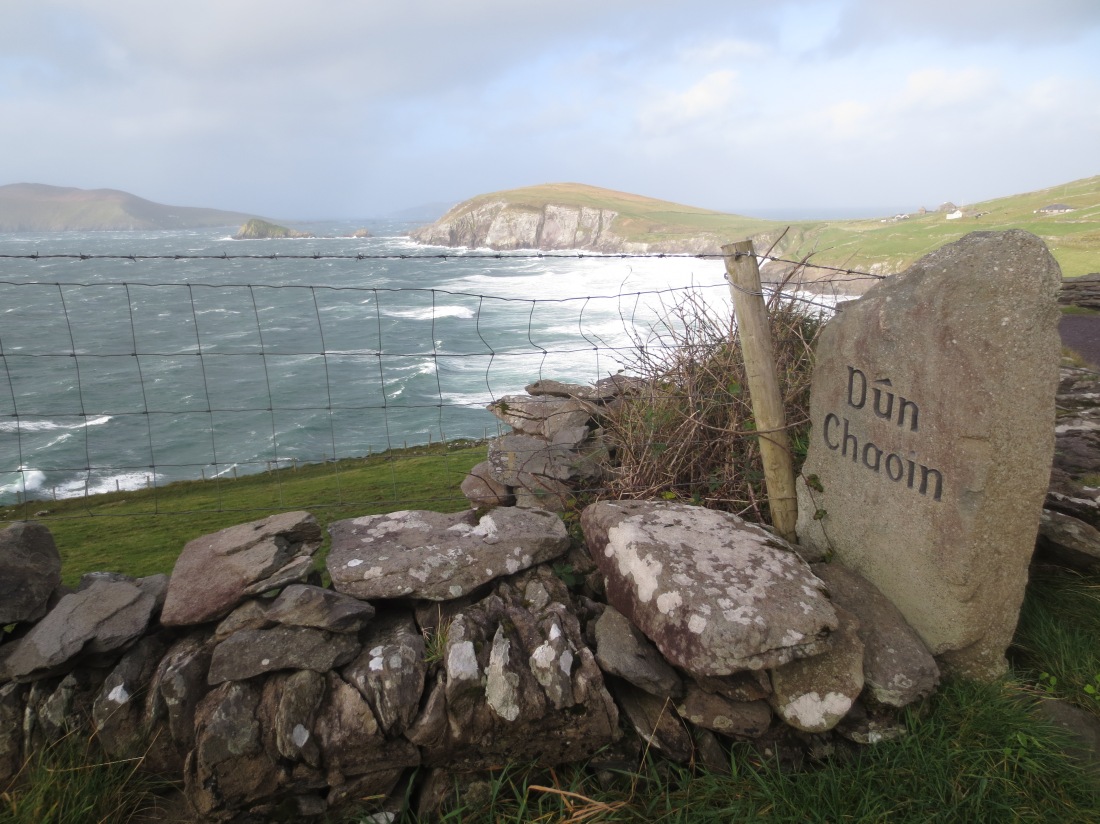 It was really windy… ☺️ 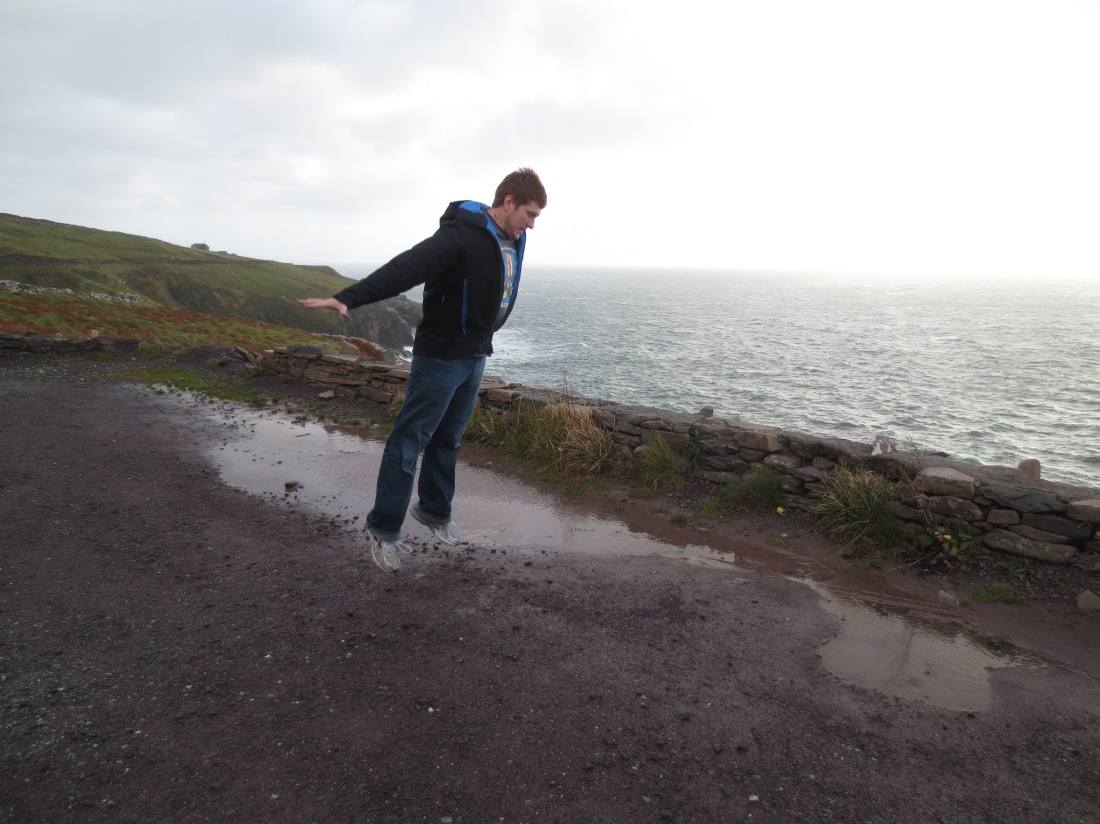 Some of the drive includes sea facing hill forts, that are from the Iron Age (pictures below are of Dun Beag Fort):

The drive also includes the beginning of a pilgrimage (marked by the statue of Mary, pictured below) that was made to the summit of Mt. Brandon (the second highest mountain in Ireland) for the cure of cancer. 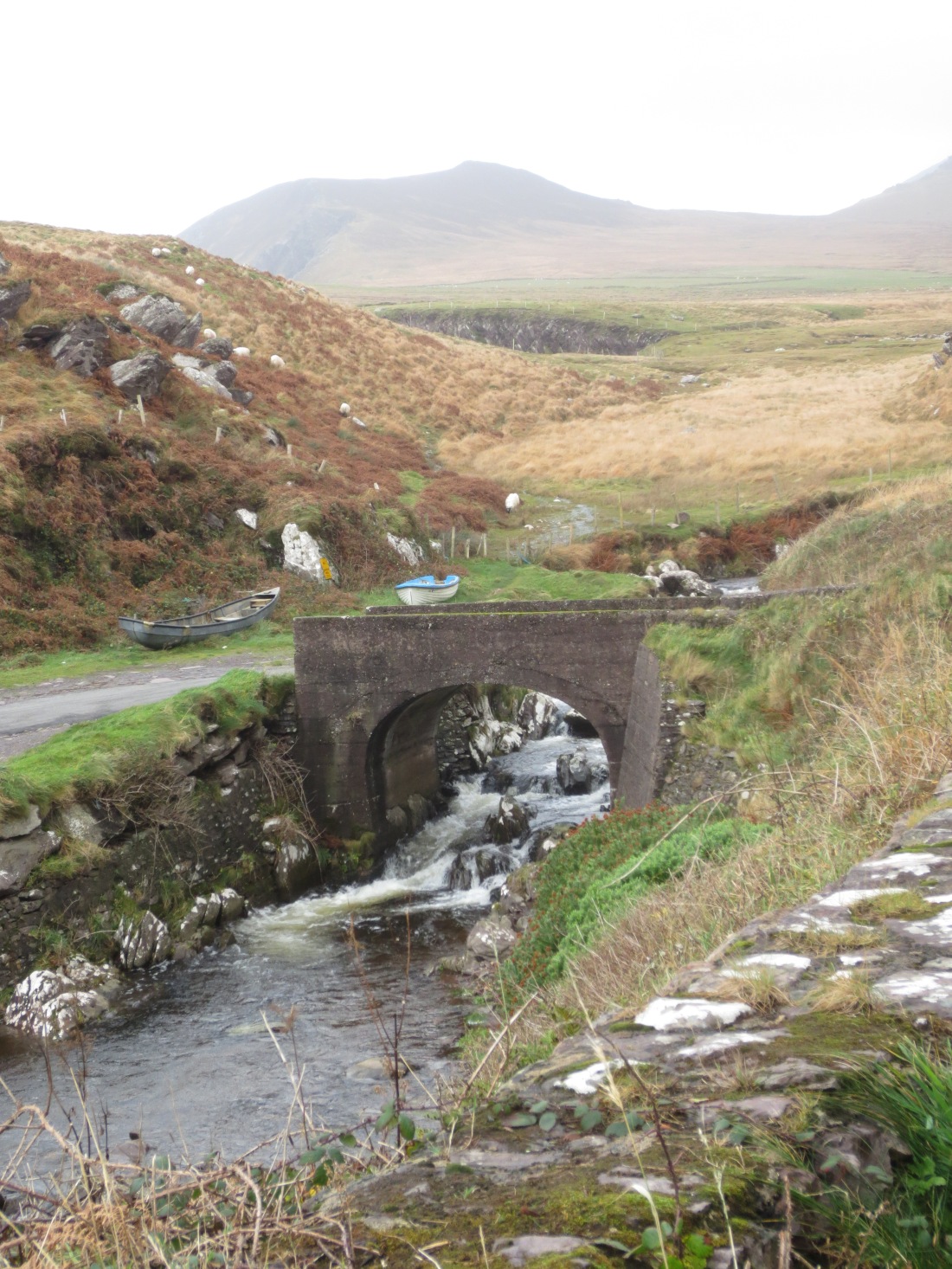 And of course, like seemingly ALL of Ireland, there were beautiful castle ruins…

It was such a beautiful drive!

We took an entire day to do Slea Head drive and to explore Dingle (except the aquarium).  We saw the aquarium on the same day we went to the Cliffs of Moher (it was a 3 hour drive one way from Dingle).

Unfortunately it was a bit foggy while we were there, but we could thankfully still see the cliffs and O’Brien Tower! 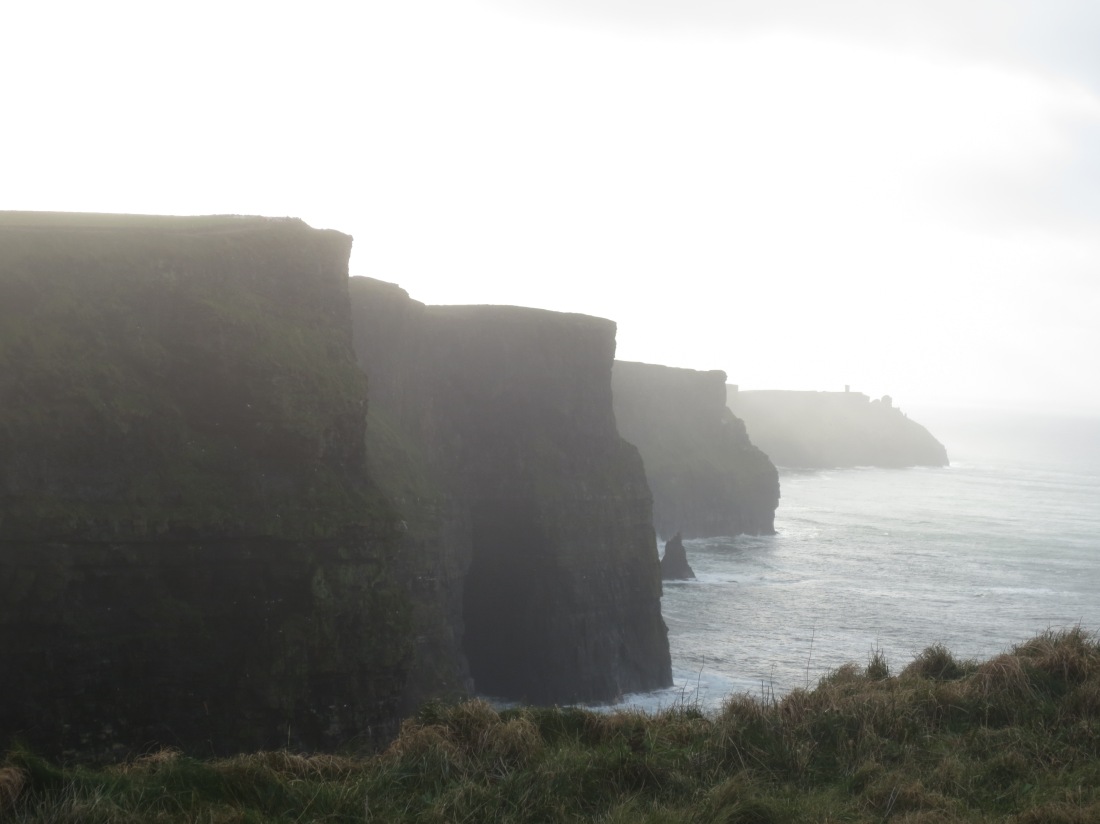 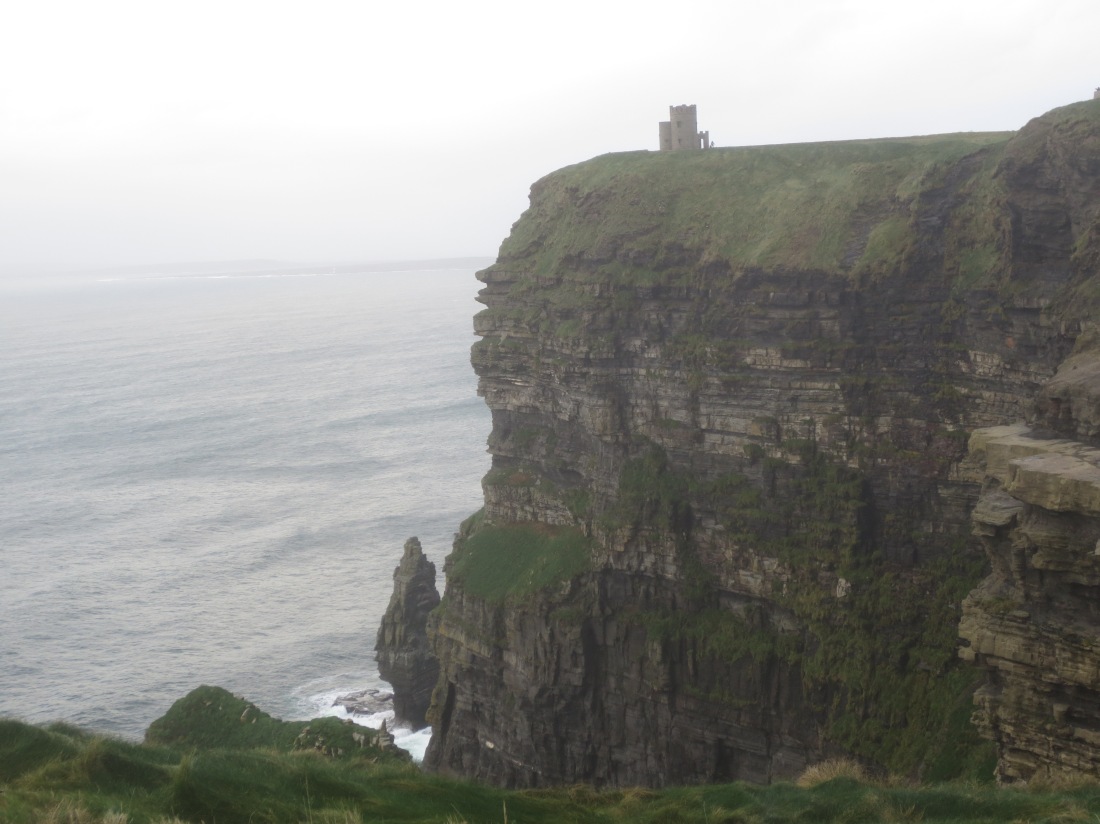 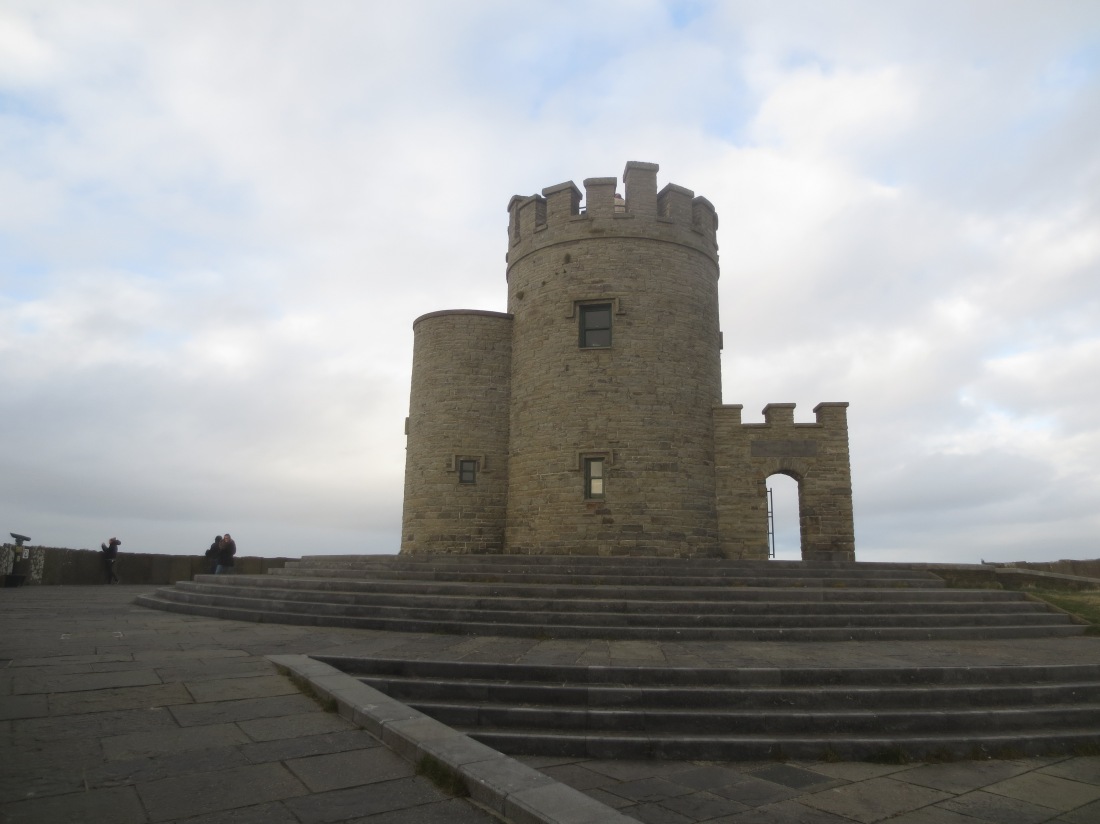 I’m a big fan of signs while traveling in foreign countries, and these from the Cliffs of Moher cracked me up (a picture is worth 1000 words, right?!).

Also, let me just mention – don’t get excited about the puffin signs unless you’re here in the short April-May window when puffins actually reside here…

On a third day, we drive part of the Ring of Kerry. Our first stop was Ross Castle: 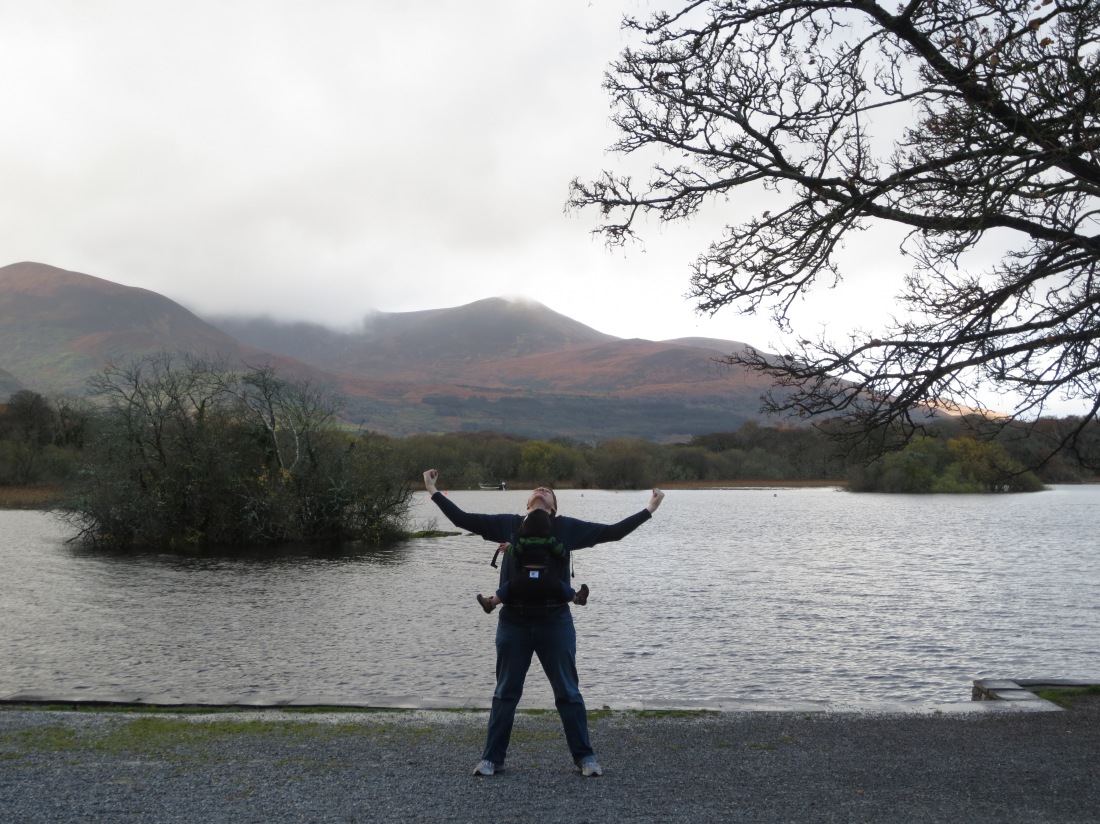 Then we stopped at Muckross House and Gardens. Muckross House is a 19th century Victorian mansion, built within Killarney National Park. It’s nearby Muckross lake, one of Killarney’s three lakes.

We rode on a jaunting car to explore the grounds, including Muckross Abbey.

The Abbey was founded in 1448, but still has well-preserved ruins.

There was a tall tree in the middle of the courtyard that was so pretty! 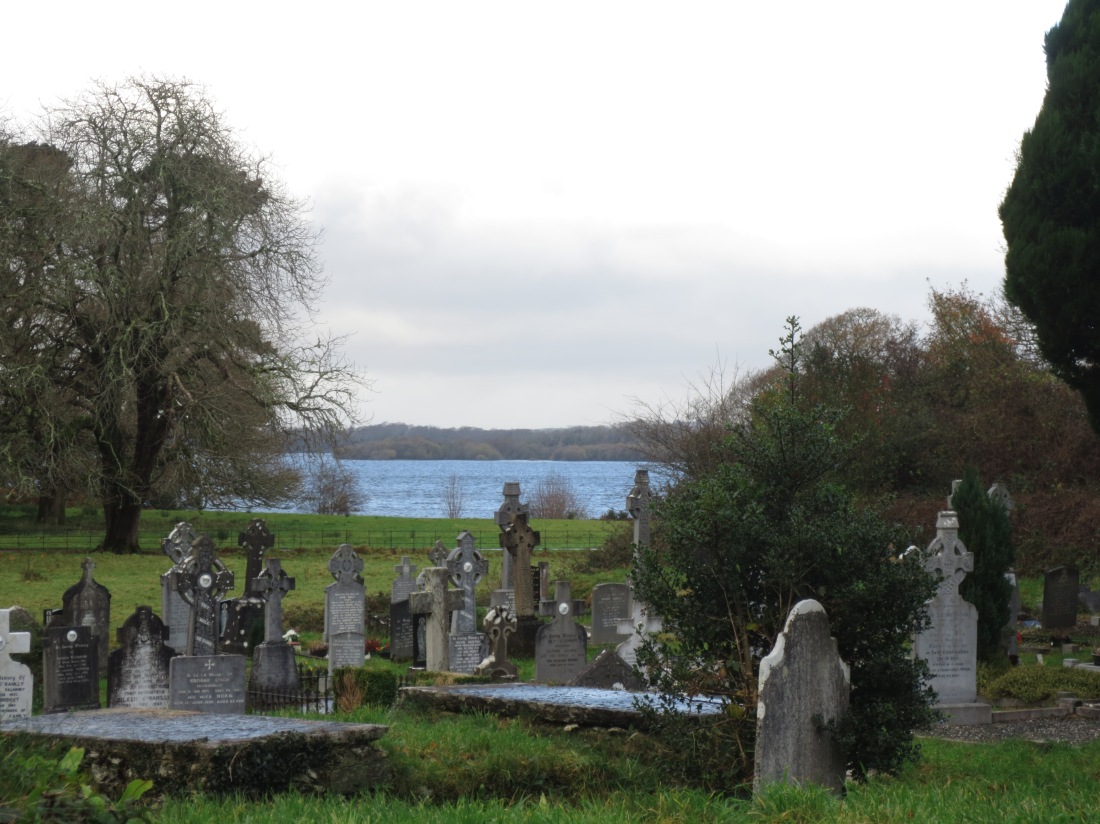 Across from Muckross House was Torc waterfall. It’s really true that it’s always green in Ireland. We were there at the end of November and it was crazy how much greenery we saw while there!

My favorite part of ALL of western Ireland was our drive from Ladies View (which was breathtaking), through the Black Valley, into the Gap of Dunloe.

Ladies View is between Kenmare and Killarney on the Ring of Kerry and is in the heart of Killarney National Park. Apparently, it derives it’s name from the pleasure expressed by Queen Victoria’s Ladies-in-Waiting on their visit here in 1861. 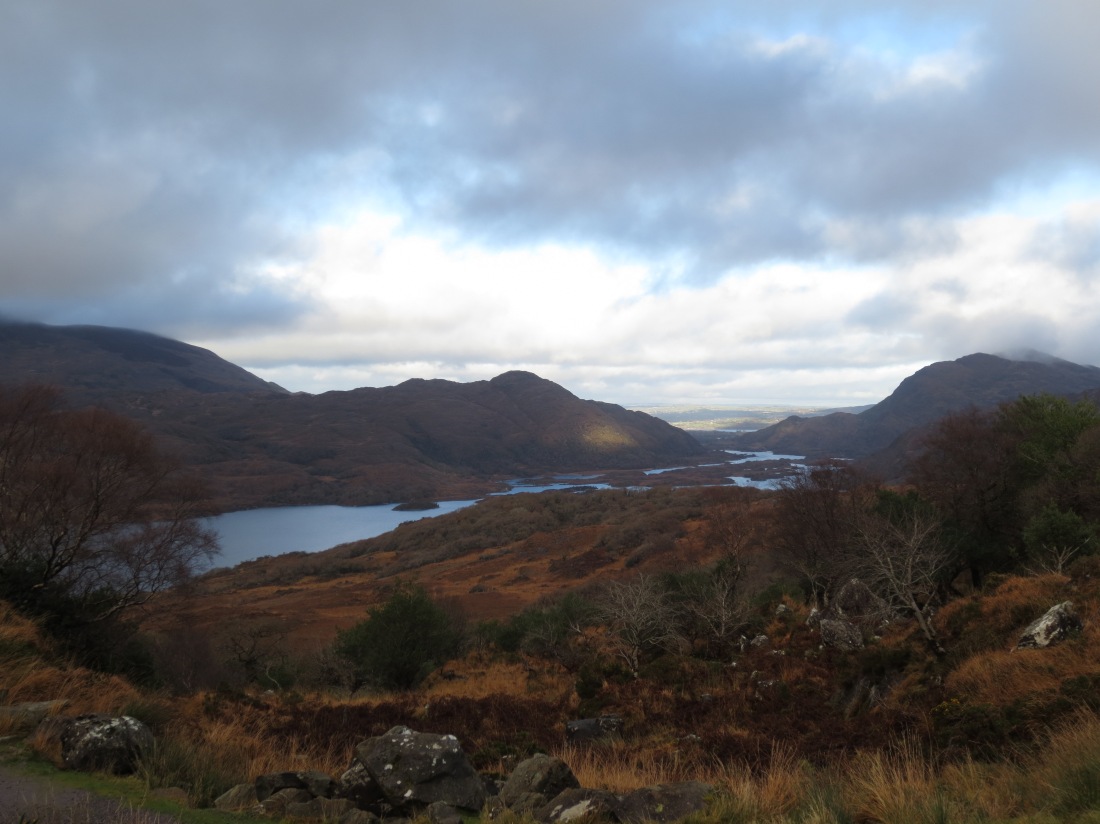 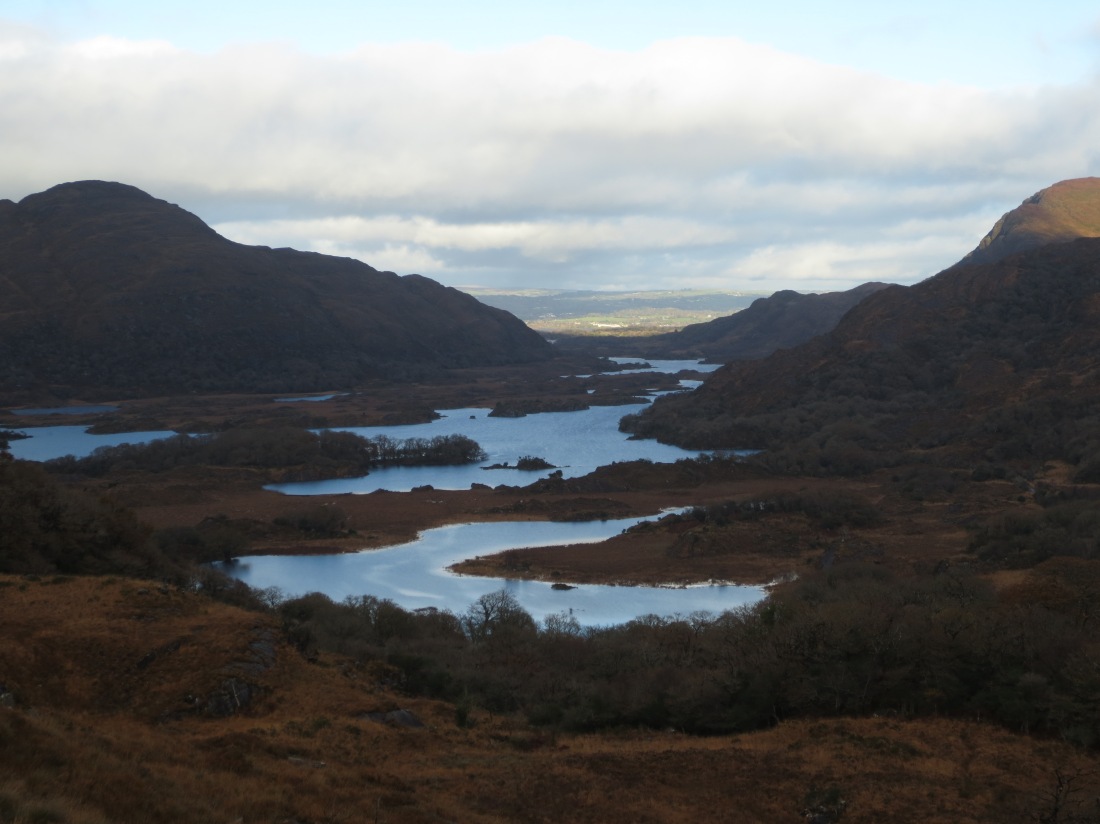 The Black Valley has a single lane road full of hairpin turns. There are sheep all over the place; we nervously joked that they were going to jump on the car… The church at the beginning of the drive is the center for the community (why is every picture so beautiful?!). 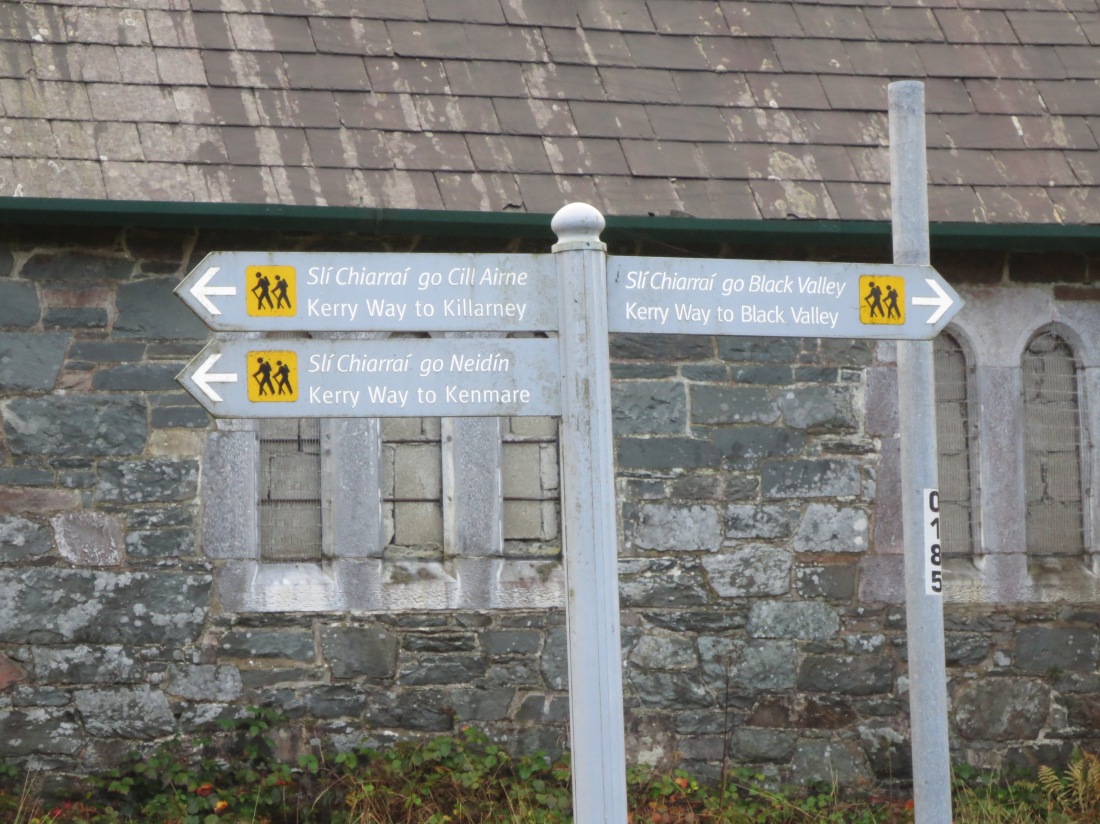 The Gap of Dunloe… You definitely know it when you see it!

We also stopped to check out the village of Killarney (so charming)!

We definitely stopped here for some delicious coffee and treats…

In case you missed it above, it took us 3 full days to do western Ireland (1 day for Dingle, including Slea Head Drive; 1 day for the Cliffs of Moher leaving us more time to explore Dingle – including the aquarium; 1 day for part of the Ring of Kerry, which included everything from Ross Castle to Killarney).

I can’t wait to share what we did in Dublin and Northern Ireland next week! It’s so much fun to look back on these photos. If you have a chance to go to Ireland – DO ITTTTTT!!!!