“I’m so shinyyyyy! I could sparkle like a wealthy woman’s neck. Just a sec!”

Last year, “Shiny crab” was the Halloween costume request from my eldest son. And yes, I heard that song on repeat (in my head) while making the costume, haha!

I found a lot of cool costume ideas on Pinterest, so definitely check that out if you’re DIYing your own version of this costume. But one constraint I knew I had was to make it without a headband. I know the hubs appreciated me not having our son wear one, but more importantly, I was afraid he would lose it if the eyes were a separate piece (same issue I had with using gloves for the claws).

Based on minimizing the costume parts, I decided to convert a zip-up hoodie, get matching pants, and convert an old TMNT shell I had (although a cardboard “sandwich board” is a GREAT alternative idea).

I used purple fabric and ping pong balls for the eyes (I used sharpies to draw on the irises). I used the ping pong balls and trial/error to make them, but I think pictures describe the process best (Note: I stitched both the sides & front/back of the eye stalks together):

The picture above also shows how I made the antennas, but I should’ve learned from Gary the Snail and stuck with plain pipe cleaners (without fabric covers) for lighter antennas that stood up easier.

Next I made the claws:

I hand sewed small, gold beads to act as the extra razzle-dazzle Tamatoa has on his claws:

Then I filled them with stuffing, and sewed the ends shut. I left plenty of fabric to allow myself to sew them into the inside of the jacket sleeves:

The hardest part to construct was the headpiece. I cut the eye stalk placeholders, inserted the actual eyes into those holes, then sewed the stalks into place once I was happy with the placement (see the right eye in the middle, right pic below); 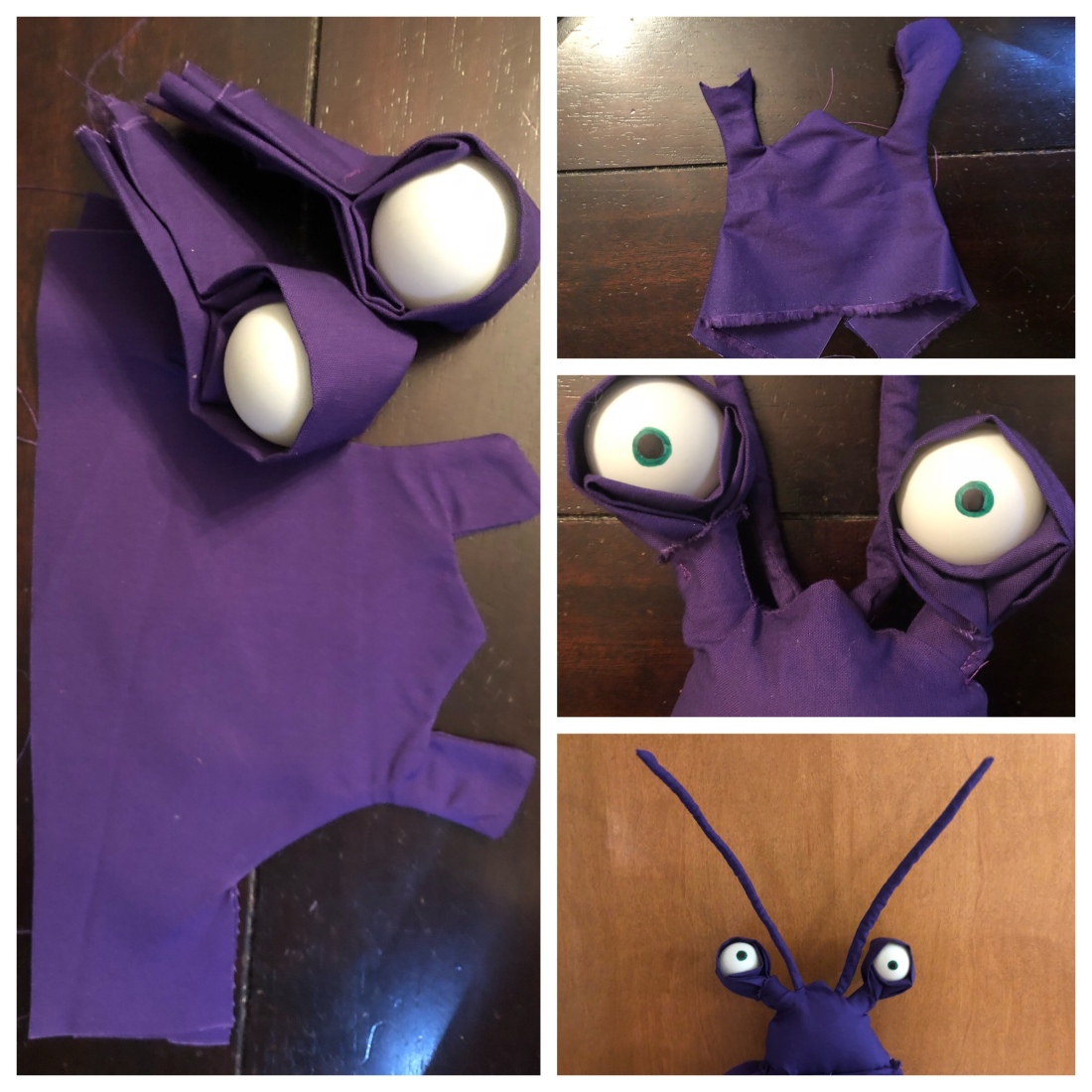 The antennas were similar – I just cut two slots and sewed them into place once I was happy with the placement. Something that might be hard to understand from the pictures above, is I only filled the top of the headpiece with stuffing. I threaded the rectangular bottom flaps (simply folded inward in the top right pic) through a slit I cut into the hood, then sewed the front and back of the head onto the hood:

It’s worth noting that I actually removed the head after the picture above was taken, removed half the stuffing, and reattached it. It was still a bit too top heavy though, so I should’ve sewed it on right below the eyes. Learn from my mistakes if you DIY this yourself! 😉

For the shell, I used (a LOT of) spray-on adhesive to attach dollar store treasures (the “gold coins” are checker pieces!). Then I spray painted it all gold. Make sure you get the “metallic” finish – the original spray was more of a matte finish, but the metallic spray looked great!

For the additional four legs, I filled purple tights with stuffing and sewed them to the jacket. I made the top right leg shorter (since it’s referenced in the movie that Maui cut part of it off in an earlier battle). Yeah, I liked the movie, too… 🤓

Thankfully, my little guy was a happy customer! ☺️

(Our staircase above was finally finished recently!)

(We also finished the built-ins pictured above earlier this year!)

One super cool feature of this costume was how his extra legs would fly when he ran: 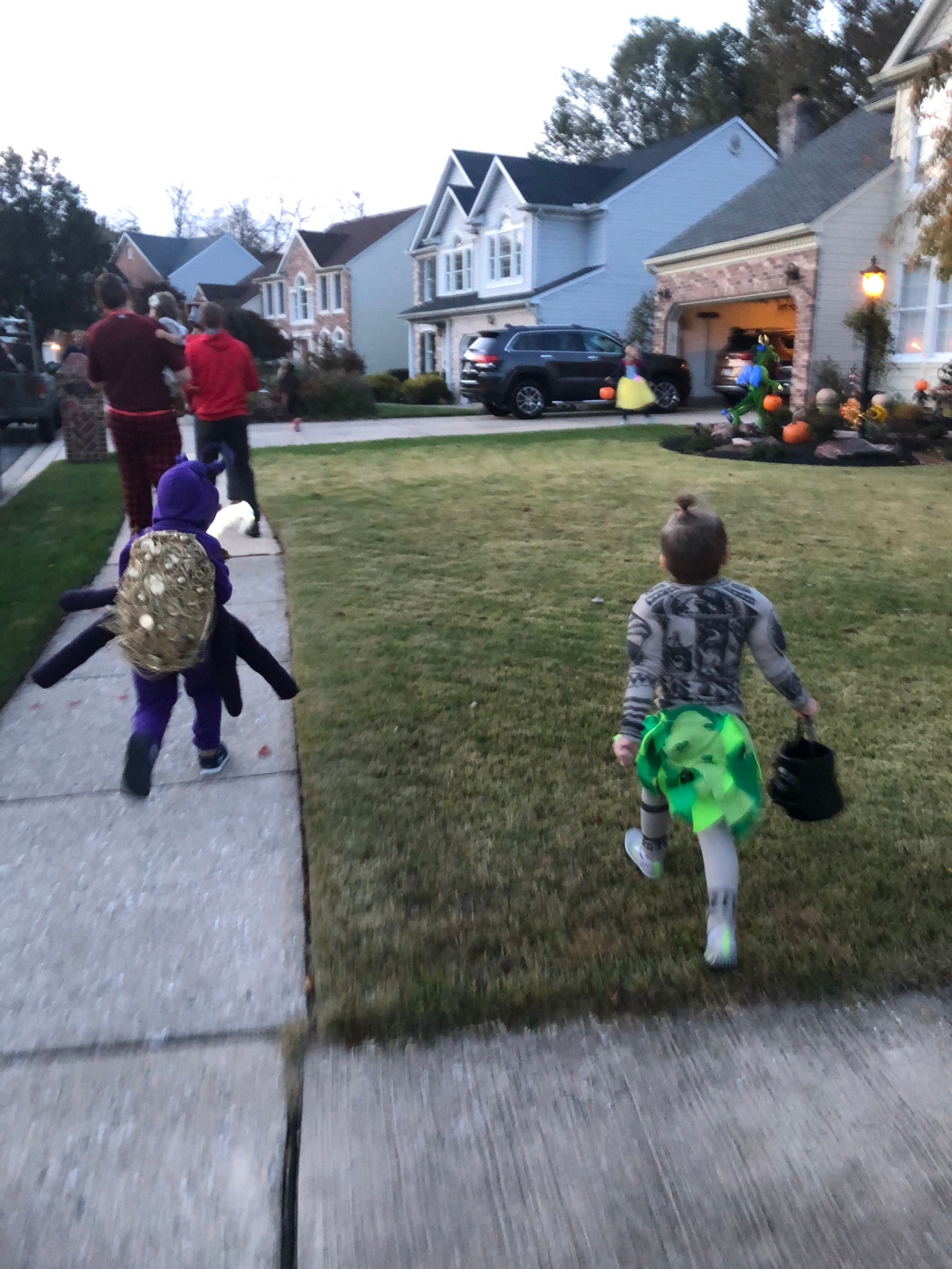 (Here’s the Maui costume tutorial if you missed it!)

The boys were very in-character… 😆

(Sneak peek of the Moana costume above!) 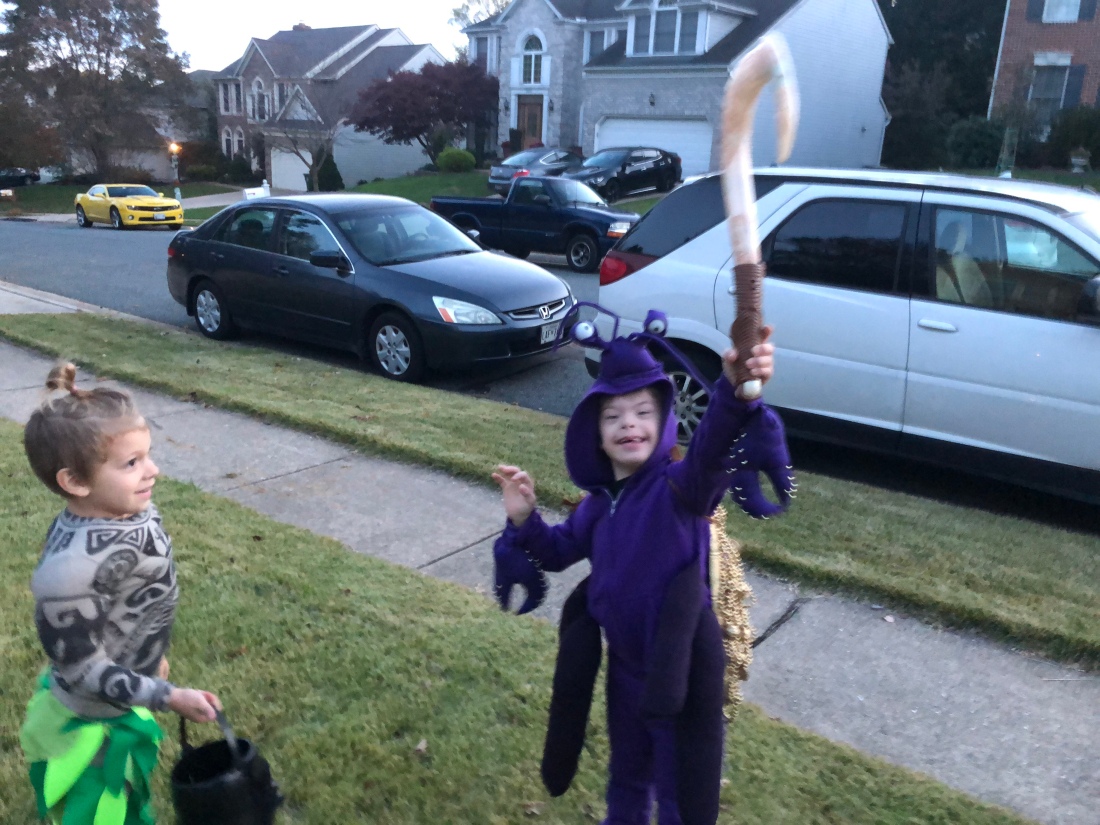 Anyone else have the “shiny” song in their head now? I know I will for the next week… 😁